We live in a simulation. So here’s Mayor Lori Lightfoot of Chicago dressed as a low effort superhero called the Corona Destroyer. pic.twitter.com/gdfGh4ByOO

You can do better than that.

A re-elected #SaskParty gov't could notify the Trudeau government that wasteful spending on unreliable, inefficient solar and wind is over, and that our own affordable coal and gas will continue to power this province. #skvotes https://t.co/Qk0MY6f7z5

THE COVID MEASURES ACT OF 2020: Police are authorized to demand proof of residency and if residents refuse entry, officers will be able to obtain warrants faster through a new, virtual system that was established in collaboration with the Crown, the premier said. 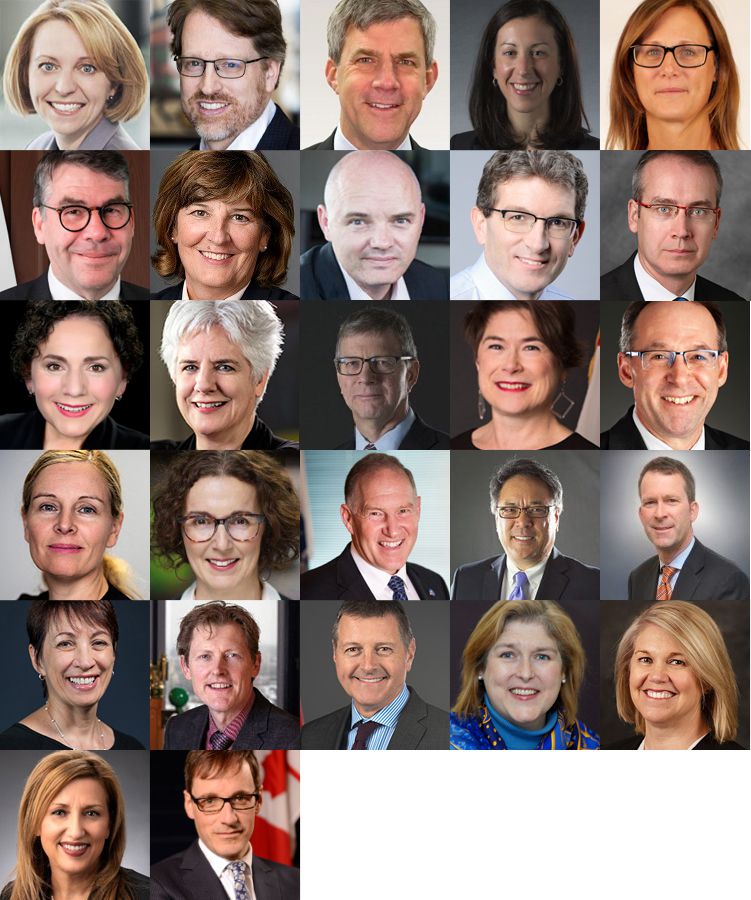 Dick Costolo is the former CEO of Twitter and on the current board of Patreon. He’s worth $300M. 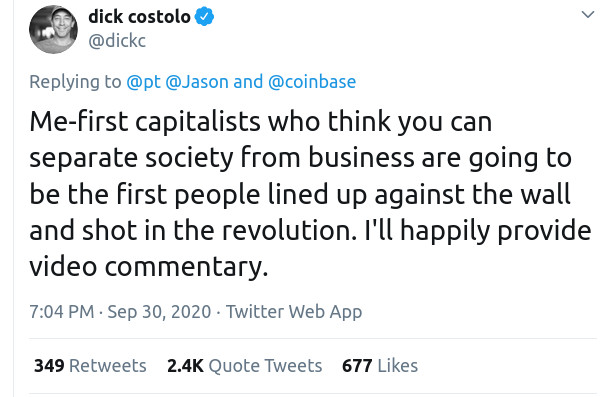 In what’s being called a “shocking” misuse of personal health information, Ontario police services made unauthorized searches of the province’s COVID-19 first-responder data portal — including querying entire postal codes to find active cases of the virus, according to documents obtained by two civil rights groups.

In a memo addressed to all police chiefs in June, Ontario’s Ministry of the Solicitor General said an audit of the COVID-19 database — a controversial and now-shuttered portal for first responders — revealed “many” searches violating the province’s directive that the tool be used cautiously and with precision.

The audit raised “concerns that the portal is being used beyond the express purpose that the government intends,” wrote Richard Stubbings, assistant deputy minister of the public safety division, in a June 11 letter.

Among the unauthorized searches listed: “broad-based” municipal searches with no specific address, including queries of postal codes or of another municipality, and searches of a specific name unrelated to an active call for service.

“I strongly urge police services boards and chiefs of police to ensure that access to this critical information is strictly for responding to a call for service,” Stubbings wrote.

The memo — obtained through a freedom of information request by the Canadian Constitution Foundation, a civil rights charity — is the latest problem stemming from a portal dubbed an “extraordinary” privacy invasion by human rights groups and deemed an unnecessary infringement by Ontario’s privacy commissioner.

“I was shocked when I read the extent of what appears to be abuse of that database,” Christine Van Geyn, litigation director with the CCF, said Wednesday.

“At the same time, when you look at what access was granted under that regulation … it’s not surprising that such a database was abused.”

The temporary portal was created via an emergency order in April, letting first responders including police officers access personal information such as names, addresses and birthdates of people who tested positive for COVID-19. The database was intended to be used solely by 911 operators and only for active calls, to aid efforts to limit the spread of the virus.

The province halted police access to the database in July, after a legal challenge filed by human rights groups including the Canadian Civil Liberties Association argued the portal was an unjustified invasion of privacy.

Data released as part of the CCLA’s lawsuit revealed Ontario police services searched the portal 95,000 times. While some services, including Toronto police, never accessed the portal, a handful of others made up the bulk of the queries.

In a Sept. 1 report to its police services board, Durham police called the database “extremely unreliable,” saying that, in good faith, its staff adopted broad, “wild-card style” searches to glean results when more precise queries failed.

Heckofajob there, technocrats. Thanks to your efforts, the day is fast approaching when the majority of those who contract COVID will refuse to be tested at all.

We’d all still live in caves, but with really, really fancy curtains.

James Comey is stricken with amnesia in real time.

And I thought it was a wash.

Regina students in band class must blow into their instruments through masks with a slit. https://t.co/fM8JWm3EFk 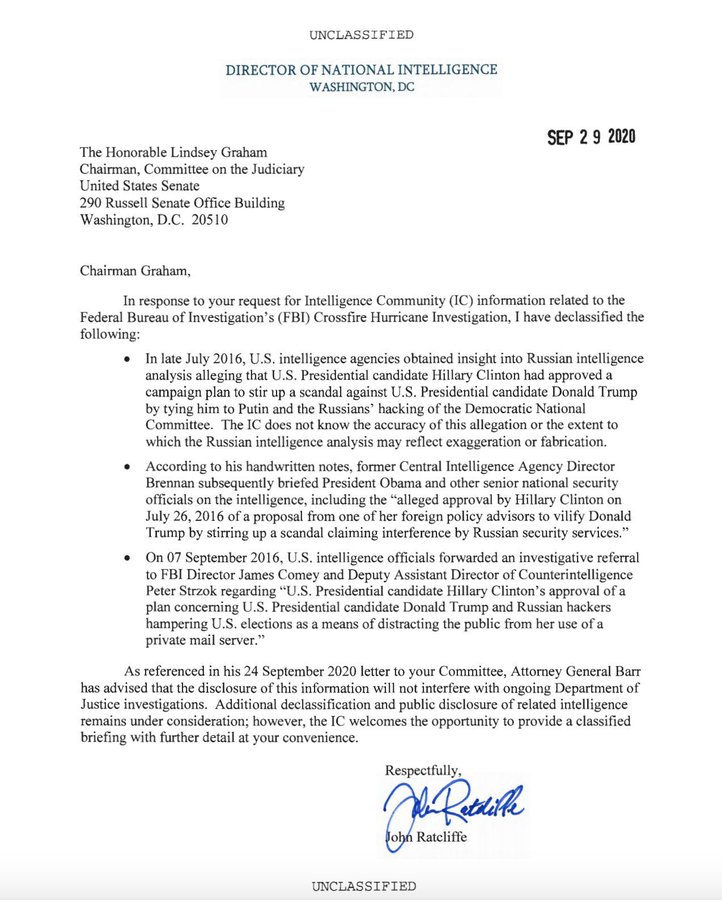 Here's the moment on July 24th, 2016, when Robby Mook planted the Russia collusion hoax. This is what started it all. As we just learned from @DNI_Ratcliffe, this was immediately followed by Hillary pushing the fabricated scandal that Trump was working with Russia. pic.twitter.com/mRlLtk2CJ4

One drink for “Come on, man!”
One drink for “Drug test”
One tiny sip for each time Chris Wallace rescues Biden. I won’t be held responsible for alcohol poisoning.
Drain the bottle for “ear piece”.

The debate begins at 9pm Eastern.

Timing is everything: The old Gray Lady ain’t what she used to be, but she can still manage to conjure a story out of nothing. Using stolen tax returns and mirrors, the New York Times manufactured a scandal that will allow Chris Wallace to ask President Donald John Trump about his taxes at tomorrow’s debate instead of asking Biden why he and Obama used the FBI to spy on President Trump. (It’s deja vu all over again).

The strangest campaign in history.

And this just dropped. 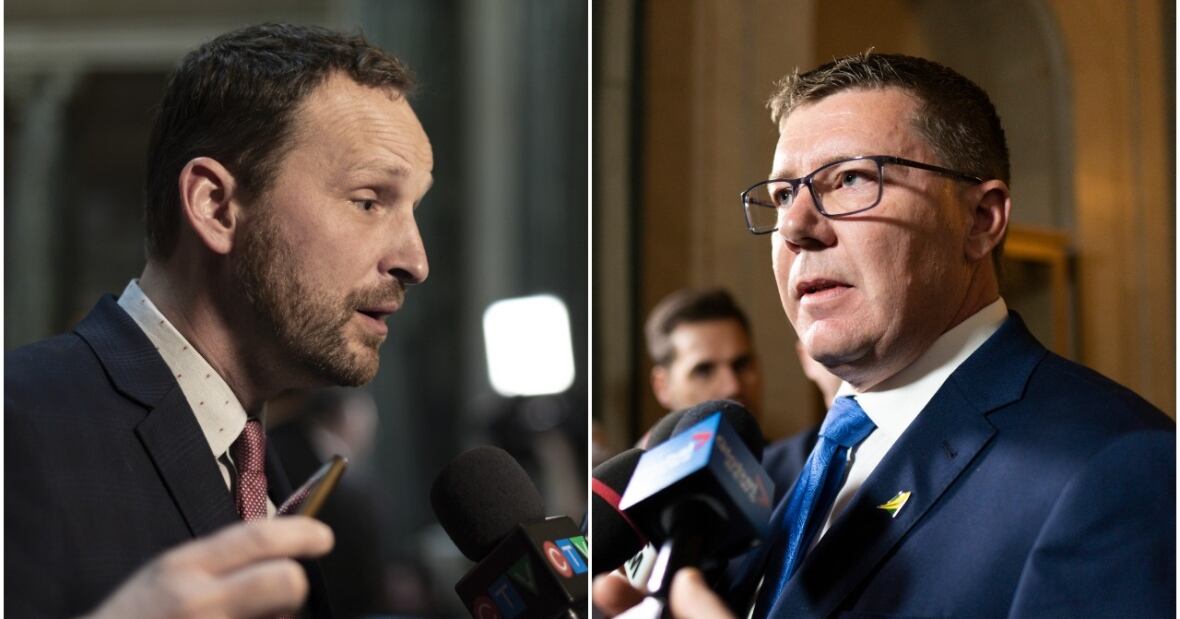 Meili at left, Moe at right.

The Sask Party holds 46 seats and the opposition NDP has 13. There are also candidates running for the following: Buffalo Party, Progressive Conservatives, Green Party, and Saskatchewan Liberals. Further details at CBC.

Update with correction. There are actually 61 seats to distribute, as two were vacant at dissolution. Thus I have to void the first group of entries accordingly and allow you all to post again. My bad, I was sloppy there.

Please use the following format for your prediction — should total 61;

The most accurate prediction will win a free book from the SDA Free Book Library. Winner will be announced on election night or as soon as possible afterward.

The SUHI intensity is the difference in surface temperature between the built-up and non-built up pixels of an urbanized area.

BREAKING: @IlhanMN district Ballot Harvester "I still have to pay Al-Shabaab(Al-Qaeda) to leave me alone." "Al-Shabaab(Al-Qaeda) is demanding one thousand dollars from me." "The judges(Election) are getting paid. They are corrupted" #CashForBallots pic.twitter.com/0GWlLuov6t