A civil liberty group is sounding the alarm after British Columbia’s New Democratic Party (NDP) Premier David Eby announced a forthcoming new law that would permit the government to take away one’s property or goods prior to being charged with a crime.

The soon-to-be introduced “unexplained wealth order” (UWO) was announced by Eby on Sunday as part of a broader “public safety plan.” The government says the law is intended to target gangs and criminals who “profit on misery,” but experts warn that such a law would be a severe “infringement” on one’s constitutional rights as defined in the Canadian Charter of Rights and Freedoms. […]

While the full details of the UWO won’t be released until next year when it is formally presented to the province’s legislature, the NDP government has already attempted to justify the proposal by saying that the law would help deal with “young people [who] are attracted to gang life by images of fast cars, fancy homes and luxury goods.”

“By seizing this property from high-level, predatory criminal organizations and individuals, the province can take away this incentive and send a clear message to organized crime,” the government added.

This isn’t new. It’s an expansion of the BC government’s lucrative Theft Under $75K Program.

Tonight we get a lesson from Viva Frei about How to Fish with a Drone.

Your fishing, drone, or other tips are much appreciated! 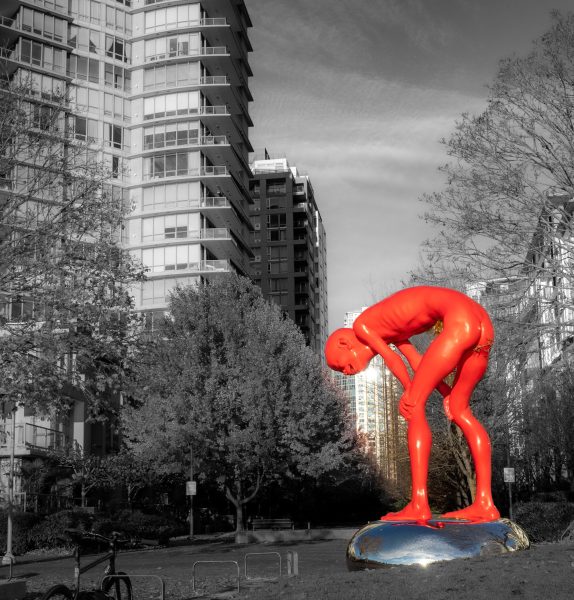 Submitted by reader Peter G: My recent pic of arguably the ugliest public “art” installation in Vancouver — and that’s saying something. Chinese sculptor (from China). I masked the background to b&w in search for a grotesque. False Creek seawall.

Here are forty-four of my favorites to punctuate the long Thanksgiving weekend. They’re a mix of economics, medicine, science, and philosophy.

Pollspotting at CTV Ottawa: Do you believe it was necessary to invoke the Emergencies Act in February?

@NBCNews, is it standard practice for employees like @oneunderscore__ to set up recurring payments to the subjects of their "reporting," as Ben has apparently done for @Keffals? pic.twitter.com/8OMeuTZUos

You’ve likely never heard of him, here’s some recent background.

The prosperity of modern America has helped conceal a catastrophe in employment collapse for prime age men. Prime working-age men — not my definition, 25 to 54 — it’s pretty self-evident why they’re called this. They’re not just important for the workforce, where they’re a main component. These are the crucial years for family formation and raising kids as well. For about two decades after the end of the Second World War, American prime male workforce participation was very, very high. Maybe 3 percent of men were not working, or looking for work. Then around the mid-1960s, something happened, and it was a big something. Because there was a retreat from the workforce, a flight from the labour market. That was almost a straight line upwards between the mid–sixties and 2016 when my first edition of Men Without Work came out. It almost looks like a straight line. It almost looks like something out of geology rather than something out of the social sciences. 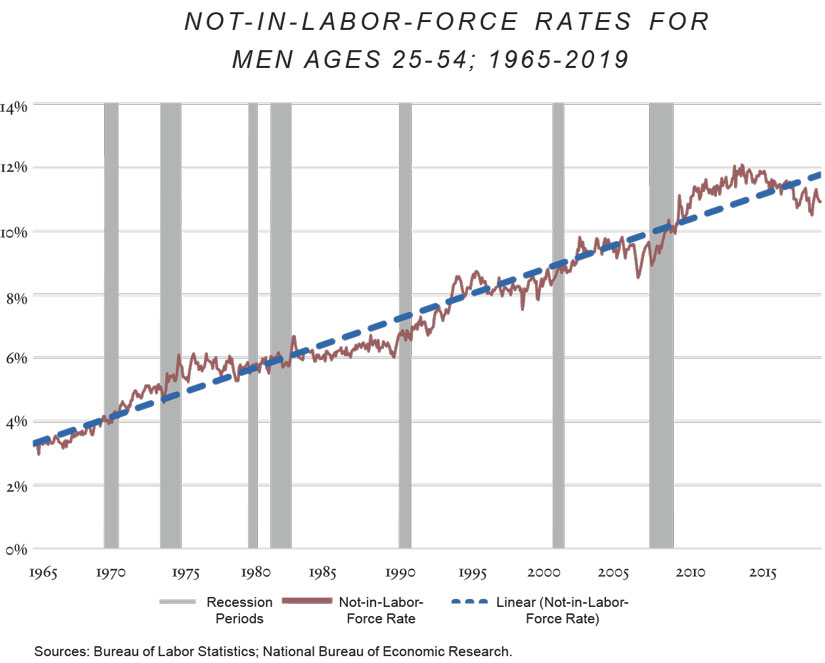 Since then, this straight line has continued almost exactly in the same direction. That’s very odd. I could have almost drawn the same line back in 2016, and you could have seen it continue to this very day without altering it at all. What this means is that over three times the share of men out of work, and out of the labour force, can be seen today in America as back in the sixties. In practical terms, this means that the work rate for modern American men is at Great Depression levels. We didn’t start measuring employment seriously in the United States until the very tail end of the Great Depression, until the 1940 census. But the work rate this month for American prime age guys is lower than it was in 1940, when the unemployment rate in the country as a whole was 15 percent. And for the 21st century as a whole, for the entire 21st century, you average it out month by month, the work rate for prime age guys is substantially lower than it was in 1940. For the 21st century to date, we have had a 1937 economy for work for men, even though we live in this fantastically wealthy, productive, technologically dynamic world.

We have this amazing situation in modern America where we therefore get all of this happy talk about how low our unemployment levels are. We’re at near full employment; we’re at full employment. And at the very same time, if you actually take a look at the population numbers, for every unemployed guy — this is in 2022, this is right now — for every unemployed guy, there were over four who are neither working nor looking for work.

Audio of the full interview is here.

Another day, another feke poll about Covid.

Related: Sweet John Campbell admits how naive he has been to trust the “experts”.

Where the foxes caper unmolested, the government packs your school lunch and because a budgetary line item reading “bribes to Chinese officials slush fund” might look awkward:

Britain sent more than £50 million of aid to China last year, despite repeated pledges to end the ‘indefensible’ handouts.

Figures released by the Foreign Office yesterday revealed that the world’s second biggest economy received an astonishing £51.7 million in UK aid last year, in spite of cutbacks to the wider aid budget.

Details of how the cash was spent have yet to be released, but it covered projects in areas such as tackling climate change, reducing demand for the illegal trade in wild animals and promoting human rights.

And thereby, cloak the indefensible with the unassailable.

Was Canada a testing ground??

Biden Admin Pushed Trudeau to Crack Down on Freedom Convoy

Today In Islam:  Muslim outreach in Nigeria.  Lots of fun at the World Cup.  And this week in Jihad.

"If there is ever a place I can be and I am not going to get in trouble, it is going to be at #FTX." 🤡 – @kevinolearytv aka. Mr. Wonderful pic.twitter.com/VCOrAZmIgt

Including a thing that your mother must never hear about; a thirst quenched; a house that’s legally haunted; a practical application for fluid dynamics; and how to land a plane when it’s all going horribly wrong.

All this and more.

This evening we get to enjoy a spectacular video about Mount Everest. h/t Marc from Calgary

Your high or low tips of late are appreciated!

Ostrich on the loose in taber alberta. 20+ ostriches escaped from a farm just outside of town pic.twitter.com/DThNnC7HYs

Quote of the Day: Chrystia Freeland emotionally testified to a comment form a US investor that said he would not invest in a Banana Republic like Canada. She responded by freezing the assets of her political enemies.*

Until now, it’s always been the case that, despite whatever other mayhem they may cause, central banks can at least generate positive cash flow. Not anymore, so it appears.

One way to correct this imbalance would be for the federal treasury to cover B of C losses. But this would be politically awkward, so the Keynesians have come up with a better idea: deferred assets.

Basically, we’ll just call our growing liabilities an asset, which we promise to make good on at some undisclosed future date. We’re good for it, right?