On this, the 57th anniversary of Dallas, we're reminded that had it not been for Democrat voter fraud in the 1960 presidential election there would've been no #JFK riding in an open air convertible for Lee Harvey Oswald to assassinate. https://t.co/uC9FOOO7oi

Via email — “Please see attached photo of a small portion of the 1,250 American flags erected by the local Rotary Club in honor of our Veterans Day. The flags extend for almost a mile along our bayfront. Each is individually sponsored in honor or remembrance of a veteran.” — Steve from Corpus Christi, TX 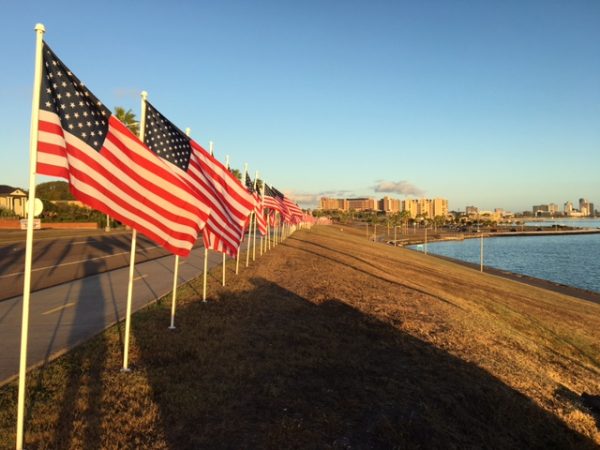 Early history of Oil (and more)

Back when we still knew how to build things.

For naval history fans: The Battle of Jutland – Clash of the Titans – Part 1

Best detailed online account I have seen of that battle.

Two more parts should linked from the first part. Total almost three hours. Pour yourself a glass of your favorite beverage and enjoy.

More at the link.

@ 5:57 into the video: “The first thing every totalitarian regime does, along with confiscation and mutilation of reality, is confiscation of history and confiscation of culture. I think they all happen almost simultaneously.”

The similarities with today’s attempted takeover of civic institutions by Leftist mobs is beyond spooky.

Years ago I ran a non-profit, all volunteer charity in my hometown of Vancouver. The charity helped several thousand people and one of them was a 40-something woman who was a recovered heroin addict, homeless person, and prostitute. I took the opportunity to ask her a simple question: “Do you remember the event that prompted you to finally turn your life around for the positive?” Her response has stuck with me to this day: “I hit rock bottom. I needed to hit rock bottom to eventually change.” She went on to explain that “rock bottom” means different things to different people. But, for all, it is the pivotal moment that gives them the strength and courage to say “enough is enough” and begin the slow climb upward.

In our 24/7 news cycle, some might think that recent events in America are an aberration, a one-off that the nation will eventually get past. But such problems have been going on for a long time. Back in 1993, the WSJ’s Dan Henninger wrote an editorial called “No Guardrails”. Two days ago he wrote a new piece called “America’s New Nihilism”. Both are explained in detail here.

The recent riots and the Leftist response to them are mere warning signs along the spiralling highway down to the abyss. But make no mistake, the nation as a whole hasn’t yet come close to hitting rock bottom. Stalin, Putin, and the Nature of Power

Update: The link is here (the video won’t play on third party websites, my apologies)

Stephen Kotkin is a professor of history at Princeton university and one of the great historians of our time, specializing in Russian and Soviet history. He has written many books on Stalin and the Soviet Union including the first 2 of a 3 volume work on Stalin, and he is currently working on volume 3.

On the anniversary of Chernobyl.

Some of you know I have written a book that many people find controversial. It is called State of Fear, and I want to tell you how I came to write it. Because up until five years ago, I had very conventional ideas about the environment and the success of the environmental movement.

The book really began in 1998, when I set out to write a novel about a global disaster. In the course of my preparation, I rather casually reviewed what had happened in Chernobyl, since that was the worst manmade disaster in recent times that I knew about.

What I discovered stunned me. Chernobyl was a tragic event, but nothing remotely close to the global catastrophe I imagined. About 50 people had died in Chernobyl, roughly the number of Americans that die every day in traffic accidents. I don’t mean to be gruesome, but it was a setback for me. You can’t write a novel about a global disaster in which only 50 people die.

Undaunted, I began to research other kinds of disasters that might fulfill my novelistic requirements. That’s when I began to realize how big our planet really is, and how resilient its systems seem to be. Even though I wanted to create a fictional catastrophe of global proportions, I found it hard to come up with a credible example. In the end, I set the book aside, and wrote Prey instead.

But the shock that I had experienced reverberated within me for a while. Because what I had been led to believe about Chernobyl was not merely wrong—it was astonishingly wrong. Let’s review the data.

Please do your part to help out those less fortunate folks around you:

A new term has been trending in Canada in the wake of the COVID-19 pandemic and it’s starting to spread around the world — caremongering.

At this time of fear and uncertainty, rather than scaremongering, Canadians are disbursing kindness — and caremongering is now virally advancing not unlike the coronavirus. It’s a global pandemic of neighbourliness.