Lady Justice trades in her blindfold for a DNA test;

And as criminals who attack Indigenous women are more likely to be Indigenous men or women than they are any other race, there’s already a fix for that.

This has been going on for years at Cdn colleges. It's just that they no longer hide it. It's better this way: whites, blacks, immigrants etc won't waste time applying for a job they'll never get. And no more esoteric debates about meaning of "merit," since merit's left the bldg https://t.co/JnF0zuL0vQ

Related: The Death of Merit

They went from “Justice is Blind” to Check Your Privilege so fast we didn’t even notice.

The chief commissioner of the national inquiry into missing and murdered Indigenous women is recommending the justice system be tougher on people who commit crimes against Indigenous women, girls and LGBT people, saying the government must prove their lives are valued.

In a taste of what’s to come when the national inquiry releases its final report next month, Marion Buller told a parliamentary committee this week that homicides involving Indigenous women must be treated automatically as first-degree murder. She also said that in criminal cases where the complainant is an Indigenous woman, judges must consider that fact as an aggravating factor when sentencing the offender.

Unless the murderer is also indigenous, in which case they’ll book a nice room at a Healing Lodge.

Who needs a pipeline, when money flows in rivers from Ottawa?

Members of southern Alberta’s Blood Tribe voted in favour of a multi-million-dollar settlement claim on Tuesday regarding a century-old dispute about cattle management.

They will be receiving $150 million from the federal government as compensation for losses the Blood Tribe suffered in the late 19th century and early 20th century.

Three-thousand-fifteen eligible voters cast their votes with 2,966 voting in favour of the deal and 49 against.

Update: Check the comments for more on the litigious history of this band.

If this had appeared at The Rebel, the national media would be in full meltdown. But it’s in a Journal de Montréal and promoted by a CBC radio news anchor, so nevermind. 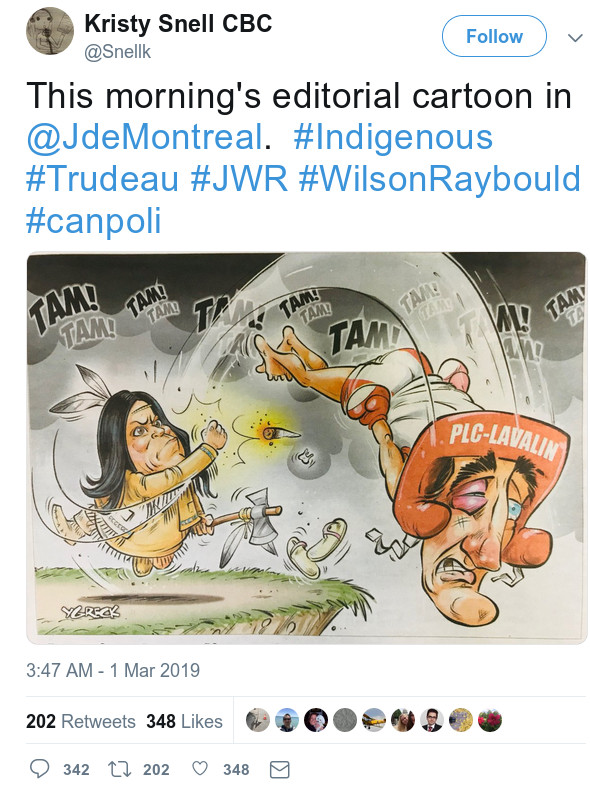 Related – “Does hockey have a racism problem?”

When Jody Wilson-Raybould inevitably quits the House of Commmons and becomes a full time left-wing activist against pipelines and so on, what will conservatives who have spent so much time building up her brand say in response?

Even as Phillips’ accusations fell apart, the media sidestepped these glaring inaccuracies and provided the Ypsilanti, Michigan man a sympathetic forum in which to air his grievances. After some pushback, the press began reporting on some of the inconsistencies surrounding Phillips’ story. More significant questions remain unasked, though, especially concerning the Native Youth Alliance, the purported non-profit Phillips started.

The Nathan Phillips thing just gets better and better.

"I'm a Vietnam Vet. I served in Marine Corps 72 to 76. I got discharged May 5, 1976. I got honorable discharge and one of the boxes shows peacetime or, what my box says is that I was **in theater**. I don't talk much about my Vietnam times." pic.twitter.com/nIoYxGoPqM

Donald Trump promised Elizabeth Warren $1M if she could prove her claim she is Native American.

Panderstein’s Monster returns to confront him.

“The original plan was eight people around the table or so, representing all the different regions, bringing forward concerns … and the first section took 45 minutes, and every single person spoke around the table,” Trudeau is heard saying in the video.

“That is not the spirit of reconciliation, of the nation-to-nation relationship we’re supposed to have,” Trudeau added, noting that his “absolute time cap” was 9:05 a.m. Around 9:45 a.m. on Wednesday he addressed the party’s caucus meeting.

We are all Zimbabwe now.

The name of Vancouver’s Stanley Park may be up for debate as the city’s park board confronts its colonial past and pursues reconciliation.

Kamloops-area indigenous activist Kanahus Manuel is from the local Neskonlith First Nation. Over the past couple of years, she has become the figurehead of a Greenpeace-driven activist campaign called Tiny House Warriors. Tiny House Warriors uses extremist language to fan intolerance over “settlers” and the pipeline, gaining publicity as it deploys small structures it calls “tiny houses” on the right of way of the pipeline expansion.

She is also the owner of a gas station.

When Louis Côté became suspicious of a Toronto-based laboratory that tests people’s DNA to determine their ancestry, he decided to try an experiment by submitting a sample from his girlfriend’s dog for analysis.

According to the results, Côté shares more than a friendship with Snoopy the chihuahua; they share the exact same Indigenous ancestry.

“I thought it was a joke,” Côté said. “The company is fooling people … the tests are no good.”

As opposed to the one run out of Ottawa.

The national inquiry into missing and murdered Indigenous women and girls is getting an additional six months to complete its work. […]

Department officials said they will work with the inquiry to determine the budget. The Liberal government had initially earmarked $53.8 million and two years for the inquiry to complete its work.

They need more money to come to their predetermined conclusions.

“A left-wing lobby group in San Francisco wired $55,000 to the bank account of an Indian chief in Northern Alberta, paying him to oppose the oilsands.”

A publishing house says the story of Gerald Stanley should never be told after he was acquitted in the fatal shooting of Colten Boushie. Veldon Coburn, a lecturer at McGill University, joins John on behalf of Between the Lines to discuss…
Related: Get Out of Jail Free Card?

A firearm was discharged during an early-morning break-and-enter in a rural area near Spiritwood.
According to an RCMP news release, no injuries were reported in connection with the incident, which took place Tuesday around 12:30 a.m.
One man is in custody, RCMP said. The man in custody “did not discharge a firearm,” police added. No charges were immediately laid in connection with the incident.
In an update Tuesday evening, the RCMP said they have charged Ronald Joseph, 28, of Big River First Nation.
Joseph has been charged with possession of a weapon for a purpose dangerous to the public, unauthorized possession of a firearm, break and enter, possession of property obtained by crime, operation of a motor vehicle while disqualified, and three counts of theft of motor vehicle.

Check into the Gormley show later this morning. John will be reading texts “from a phone found in the SUV with Colten Boushie”.