World experts condemn WHO inquiry as a ‘charade’

The World Health Organisation’s inquiry into the source of the pandemic is a ‘charade’ to appease China, leading experts on biosecurity and infectious diseases have told The Mail on Sunday.

Instead of seeking the truth, last week’s initial findings, they say, were a political stunt that help the Beijing government in its desperation to be exonerated.

The scientists accuse the UN body of brushing aside concerns over a possible lab leak in Wuhan to push ‘fanciful’ theories that Covid-19 emerged outside China and could have been imported into the city on frozen food. 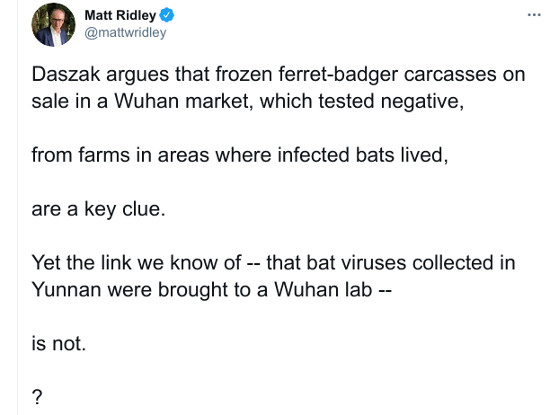 Yuri Deigin has captured an enlightening exchange on the cozy relationship between investigators and investigatees.

Flashback: WHO waits for China to approve pandemic origins investigators

16 Replies to “Fryer Ferret, In The Fridge, With A Furin Cleavage Site”