You can do better than that.

A re-elected #SaskParty gov't could notify the Trudeau government that wasteful spending on unreliable, inefficient solar and wind is over, and that our own affordable coal and gas will continue to power this province. #skvotes https://t.co/Qk0MY6f7z5

Contrary to the speculation of the past couple of weeks, there will not be a spring election in Saskatchewan.

Mark Gerretsen represents the Ontario riding of Kingston and the Islands. It’s a long way from Fort McMurray but that isn’t stopping the Liberal MP from not only opposing the project but spending money, perhaps your money, to shut it down.

Gerretsen has posted on Facebook about a petition put forward by the Queen’s University Liberals, and sponsored in the House by Gerretsen, to reject the proposal.

“We, the undersigned, citizens of Canada, call upon the Government of Canada to reject the proposal to build the Teck Resources Frontier Oilsands Mine in Alberta as it is not in the best interest of Canadians,” the petition reads.

Isn’t this the equivalent of an Alberta MP asking the federal government to shut down Ontario’s manufacturing sector? Or calling for a stop to all the tax breaks to Toronto’s film productions? That wouldn’t go over too well in Ontario and this won’t go over well in Alberta.

I’ve been in a paint booth all day, so instead of trying to play catch up on today’s Trudeau debacle and his open shunning of Western Canada, this is an open thread for those topics, plus anything else that makes you want to yell at Scott Moe to stop wasting our time and interests on this neverending shit show.

It’s not going to get better. A Conservative government in Ottawa won’t make it better. Move on. Get the ball rolling on a decoupling strategy now, lest the SaskParty find itself competing with a third option in the next provincial election.

I have worked as both a police officer & in civilian oversight of policing. Police don’t stand down when crimes are being committed unless they’re instructed to. @JustinTrudeau is selective with police independence, just like he was selective about independence of Prosecutions.

We are at a crucial moment for Canada, including Saskatchewan’s place within Canada.

The Trans Mountain pipeline must be built. And the carbon tax has to go. pic.twitter.com/zVngeoMjUv

And the choice for a new Premier following the retirement of Brad Wall.

8,500 votes are needed to win, on to the next rounds. Looks like a horse race.

Round 3 of #skpldr voting results:

Wyant is out of the race. Round 4 coming soon. #skpoli pic.twitter.com/vVYxeaiwv3

With that, the card-carrying federal Liberal is dropped from the ballot.
Round four and the lead changes.

Round 4 of #skpldr voting results:

Cheveldayoff is out of the race. Round 5 and the final round coming soon. #skpoli pic.twitter.com/VqPSgOYlUX

The new Premier Designate of Saskatchewan is Scott Moe. 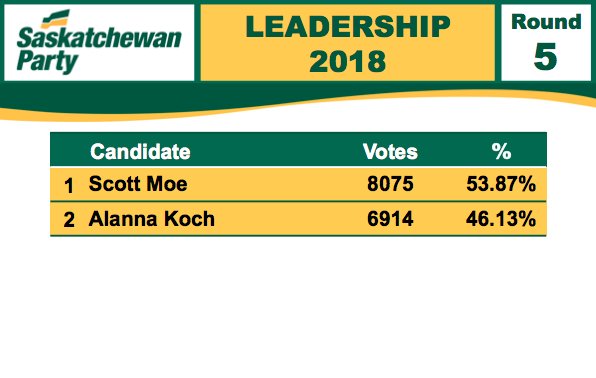 First, the S'toon guy whose car was damaged by 2 union activists, on camera, i.d.'d, SGI is after them but @SaskatoonPolice = no charges

You can listen to the podcast here.

Ken Cheveldayoff is expected to announce his intention to run in the coming days.
Gord Wyant official enters the race for Saskatchewan Party leadership.

In his announcement, Wyant — who has most recently served as Justice Minister — said Saskatchewan people can expect him to stand up for the province, “whether that be on the federal carbon tax, Ottawa’s top-down approach to the legalization of marijuana or federal tax changes that will hurt small businesses and farm families, the lifeblood of our province.
“My priority has — and always will be — defending Saskatchewan’s interests,” he said in a prepared statement.

I guess we’re seeing who the candidates will be campaigning against…the Federal Liberals.

Jeremy Harrison announces candidacy for Sask Party leadership.
I will fight a federally imposed carbon tax with every fibre of my being and with every tool at our provinces disposal.