There’s a whole lot of cold water splashed on the faces of true believers in the energy transition.

The cultish obsession with renewables – a mixture of managing by pixie-dust and mass delusion – has stymied discussions on real emissions reductions. A recent workshop in Stavanger Norway explored the role of fossil fuels as part of the solution – i.e., how do we maintain energy affordability and energy security within the context of reducing emissions. The participants called this the Energy Trilemma.

Everyone’s got a Grinch story at this time of year. This is how the Grinch tried to steal the oilpatch.

Last week’s Crown Land Sale revealed a sixth entrant in Saskatchewan’s lithium race.
Prairie Lithium is the acknowledged leader in that race. Here’s how it started.

For months, Pipeline Online has been pointing out that Alberta puts out detailed data on its power grid, but SaskPower did not. Apparently others have been asking for the same information as well. Now, @SaskPower has responded. What does a day of power production look like in SK? Wind put out 6% of its capacity, and 2% of total generation. Coal provided 42% of total  power

REGINA – While it’s not the same minute-by-minute data provided by the Alberta Electric System Operator for their grid, SaskPower has begun breaking down where its power is coming from on a daily basis. And the data from Oct. 3 and 4 showed wind generated an average of just 7.3 per cent and 6 per cent of its rated capacity of 615 megawatts. And while the Crown corporation often points out that “conventional coal accounts for approximately 24 per cent of SaskPower’s total generation capacity,” on those days, coal was providing an average of 42 per cent of the power in this province.

The New Democratic Party has a history of some of its MLAs being voraciously against nuclear power development. In particular, Peter Prebble, who was Corrections and Public Safety Minister from 2003-2006 under Premier Lorne Calvert, threatened to quit cabinet if the province did anything along those lines. In a 2005 CBC article, Prebble was quoted as saying, “I would have to step down from cabinet … in the theoretical event that cabinet was to endorse a reactor or a nuclear waste disposal facility.”

When asked what the current NDP stance was on nuclear power, Young said, “Technology changes, and times change. While I know people had strong opinions on that, I know people are going to have strong opinions today. While I’m not one of them, I know it’s important that we don’t dismiss people who have concerns and ask questions out of hand. But if the question is, for the Saskatchewan NDP, can SMRs play an important role in our energy future in Saskatchewan? Absolutely, they can.”

Jim Wilson was one of the people who helped get carbon capture built in Estevan. If the province isn’t going to do more, he thinks Estevan should focus on nuclear.

One of the leading advocates for clean coal in Estevan says the community should turn to nuclear, now that SaskPower may not do more carbon capture

“I was very much involved in trying to get it built. I was proud of what we achieved. Everything was good. I remember hearing (Catherine) McKenna in Paris make the announcement,” he said, adding, “Carbon pricing and all that has changed our world.”

He said, “You know, their decisions were not science-based, or business-based. They were politically-based. They were clearly political. And that’s what (Morgan) answered to you. It’s sad for you and I, and the community that built the first clean coal facility of its type. And it was probably a transition solution more than anything, right?

“That’s the point: they’re ignoring this technology. And it works. And to my knowledge, and we’ve developed it and built the first.” 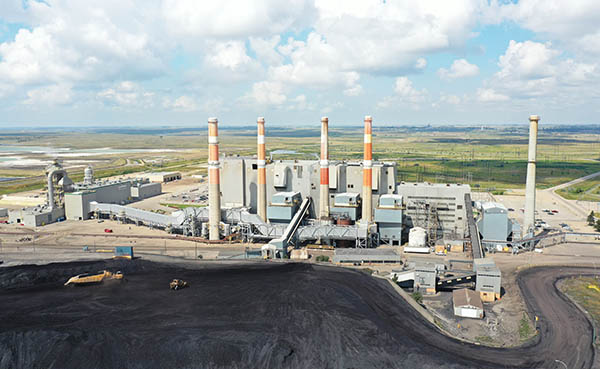 Boundary Dam Power Station. On the left is the carbon capture unit.

The reality that coal-fired power in Saskatchewan is being forced to an end, despite the possibility of carbon capture technology, is now weighing heavily on Estevan, as reported by PipelineOnline.ca.

Estevan mayor on coal: “The closer we get without any good answers by 2030, the harder it is for everyone in our community. We deserve some answers”

“And we’re not getting any answers. I mean, we’ve been meeting now with the province a few times and we said, ‘Listen, we want to know. We have to start meeting. 2030 is coming very quickly. What are we going to do? We need the federal government involvement. They don’t even answer our emails. We have to get them to the table.

“They want to shut down coal, which is a great baseload power. The only option to that would be close to that would be nuclear. And that won’t be coming (soon). Once we make a decision toward the end of this decade, it probably won’t be built till 2035-2036, something like that.”

“It’s weighing on the employees already. We have people saying, ‘You know, I don’t know for sure what’s going to happen, come 2030, so I’m bailing now. I’m going to where the jobs are now.’

“And it’s this sense of frustration, this sense of not knowing, you know, it’s a killer. And the closer we get without any good answers by 2030, the harder it is for everyone in our community. We deserve some answers. And the federal government owes us some answers. And the province, well, we’re starting to talk with them. SaskPower, we have a pretty good relationship with them, but it’s, you know, the final decisions with SaskPower are made by the provincial government, not SaskPower.”

This is a follow up to Further carbon capture on coal “not an option,” according to CIC Minister Don Morgan

Much of the energy debate at present is based around the risks associated with energy procurement systems; emissions from burning fossil fuels (FF) and radiation hazards linked to nuclear power. New renewables (wind, solar and wave power) are presented as a risk free alternative to FF and nuclear. However, what is systematically overlooked by renewables advocates are the risks associated for individuals or for society not having access to affordable energy when it is needed.