Related: So much for O’Toole

Scot Dutcher is standing in the gap between solid investigations of legitimate animal mistreatment and those that are misguided. As a former staffer at the Colorado Department of Agriculture’s Bureau of Animal Protection, Dutcher was involved in cases involving alleged livestock mistreatment.

After 15 years assisting law enforcement in various cases, he has a deep understanding of the state’s animal care statutes as well as the criminal and civil animal neglect statutes.

On-farm assessments are a service Dutcher can provide, offering feedback to owners or managers regarding the placement of no trespassing signage, gates, and things, like sick pens, for example, that would be better located out of sight from a public road. Making simple changes to avoid being a target of extremists can be an effective first step for many operations, especially in Colorado, a state he said is second perhaps only to California in the number of active animal rights extremists and activists.

When hiring employees, Dutcher said a simple Google search can provide a look into any connections or interactions an individual could have to animal rights groups, especially on social media. If no data appears at all, that could also be a red flag.

Genetic Literacy Project: The application of glyphosate to crops has increased about 15-fold since Roundup-ready crops were introduced in 1996. What has happened to the rates of [non-Hodgkin lymphoma] over the past 25 years? As shown in the figure below, while the use of glyphosate increased markedly, the incidence of NHL has remained flat, and mortality from NHL has decreased. 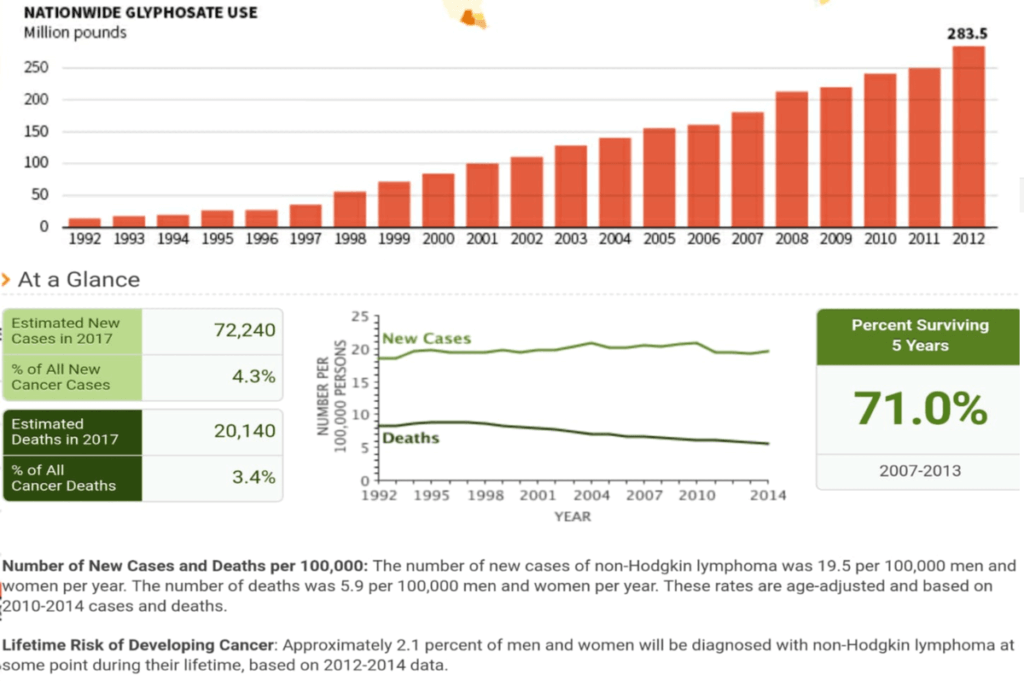 A couple of years ago, I met David Zaruk at a Society for Risk Analysis meeting, where we were both presenting. I was aware of David’s blogging and investigative journalism, but meeting him gave me a greater appreciation for the breadth and depth of his work. For those of you who do not know David, he is present in cyberspace as the Risk-Monger who blogs about risk and science communications issues. His blog has featured cutting-edge exposés about the distortions in risk communications perpetuated by the advocacy of non-governmental organizations (NGOs). Previously, I have recorded my objections to the intellectual arrogance of some such organizations that purport to speak on behalf of the public interest, when often they act in cahoots with the lawsuit industry in the manufacturing of tort and environmental litigation.

David’s writing on the lobbying and control of NGOs by plaintiffs’ lawyers from the United States should be required reading for everyone who wants to understand how litigation sausage is made. His series,“SlimeGate” details the interplay among NGO lobbying, lawsuit industry maneuvering, and carcinogen determinations at the International Agency for Research on Cancer (IARC). The IARC, a branch of the World Health Organization, is headquartered in Lyon, France. The IARC convenes “working groups” to review the scientific studies of the carcinogencity of various substances and processes. The IARC working groups produce “monographs” of their reviews, and the IARC publishes these monographs, in print and on-line. The United States is in the top tier of participating countries for funding the IARC.

Understandably, the IARC has been concerned that the members of its working groups should be viewed as disinterested scientists. Unfortunately, this concern has been translated into an asymmetrical standard that excludes anyone with a hint of manufacturing connection, but keeps the door open for those scientists with deep lawsuit industry connections. Speaking on behalf of the plaintiffs’ bar, Michael Papantonio, a plaintiffs’ lawyer who founded Mass Torts Made Perfect, noted that “We [the lawsuit industry] operate just like any other industry.”[2]

David Zaruk has shown how this asymmetry has been exploited mercilessly by the lawsuit industry and its agents in connection with the IARC’s review of glyphosate.[3] The resulting IARC classification of glyphosate has led to a litigation firestorm and an all-out assault on agricultural sustainability and productivity.[4]

Be sure to read the Slimegate blog posts, and pass them along to your MP and MLA if you still believe in such things.

I’m convinced that the widespread anti-Monsanto social media campaign of the past few years was battlespace prep by tort lawyers intent on grooming the jury pool.