I can almost hear the bus coming that Trudeau will be throwing his Finance Minister under. PM Trudeau: Morneau 'should not have accepted' gifts from WE Charity https://t.co/oSD2KqWmVn

Brian Lilley: The Trudeau government handed over ownership of personal data from anyone applying for a student grant to WE Charity — even with the charity having withdrawn from the program, where the personal data of applicants is remains up in the air. 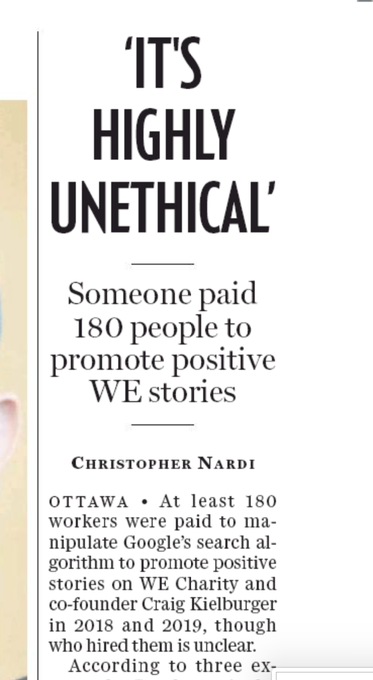 And this just happened…

The name Diana on box is same as a contact person for Me To We travel bookings… bottom of page #cdnpoli https://t.co/J64LHMcl14 https://t.co/U1W3YStep8

Related: “Hey, let’s call Craig. If he’s not giving some big-shot donor the luxury tour of Kenya, he’d be just the guy.”

Video of the Kielburgers refusing to say under oath whether their lawyer hired a private investigator to look into me and @JesseBrown https://t.co/I8m0mYUcOs

The Kielburger bros testimony has commenced on CPAC.

A new admission, extracted from a mostly stupid round robin of bafflegab.

Moments ago @marckielburger just informed the Commons finance committee that in addition to the $312,000 paid to Margaret Trudeau for speaking at WE Day events she was reimbursed an additional $167,944 in expenses. So a total of $479,944. #cdnpoli #WEscandal pic.twitter.com/XgeLXjdaIG

Jesse Brown is tweeting a play by play.

I ask the experts: Does comms training coach men to answer interrogative questions in up talk? Does up talk raise or lower persuasiveness?

So this is weird. Tony Clement was cited as a "great man" & "mentor" by Craig Kielburger.@TonyclementCPC just messaged me to say he met Craig once, has no other connection at all to Kielburger or WE, and has no idea what he was talking about when Craig cited him as his mentor

Librano math: How the hell does a contract originally claimed to be worth $19-million by the Trudeau government get an advanced payment of $33-million?

We have a winner. 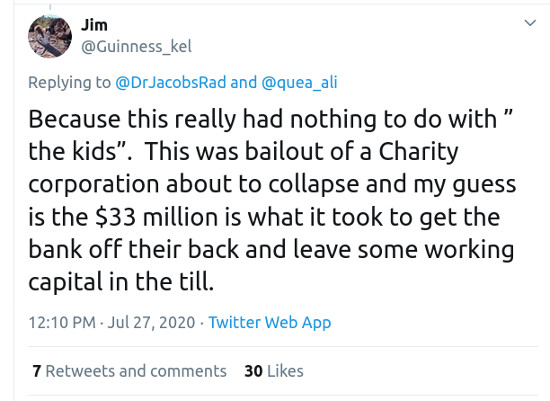 Programing note: Those SDAers retired or otherwise not working, make sure you tune in to the House of Commons Finance committee hearings tomorrow, Tuesday. Michelle Douglas, former WE chair of directors, who quit last March, is scheduled to testify, along with the Kielburger cronies.

There’s more to come out about Kenya: Who does ‘voluntourism’ actually help? Trips run by WE and other charities draw skepticism

Hey, look Margaret, too, travelled to Kenya with WE [in 2017] And that sure looks like Kim Campbell [who chairs Trudeau's Judge selection Committee] in the photo! #cdnpoli pic.twitter.com/VLPIIhuseB

There’s now so much material spewing out about the Kielburger racket, it’s hard to keep pace.

Must not annoy the paymasters.

So @davidakin scolded me for speaking to Parliament: it would harm ~Journalism~ and the right-thinking people of the CDN press agreed.

Nobody balked, no precedent set.

This thing just gets better and better.

Both a government and charity official confirmed the controversial Canada Student Service Grant contract was not with WE Charity, as Trudeau announced.

Rather, the government gave the contract to the WE Charity Foundation, which is a distinct charity with no track record.

As an aside — am I the only one who thinks Trudeau was setting up Kielburger as a political successor?

.@Bill_Morneau says he wrote a $41K cheque to WE today for expenses related to his family's trips with WE. “I had expected & always had intended to pay the full cost of these trips… not doing so, even unknowingly, is not appropriate. I want to apologize for this error,” he said pic.twitter.com/BPEoD6zY0B

Another oddity in the Kielburger/WE real estate world is how often properties trade hands among family members and insiders. The home at 212 Carlton was sold by Mingze Li to Yutain Qi, another WE employee, and again it sold more than $250,000 below the assessed value.

The family has traded some pieces of real estate multiple times before transferring them to a numbered company for what is recorded as a $0 transaction.

One accountant, who was asked to review documents related to these and other sales, said questions do arise out of what is public but added more background documents would be required to know if these transactions were more than simply strange.

Roxanne Joyal, CEO of ME to WE and also wife to Marc Kielburger, owned 1792 Lakeshore Blvd E., which overlooks Woodbine Beach, for seven years, starting in 2007.

In November 2018, the Kielburgers transferred the property to a numbered company owned by Kelly Hall-Holland, Craig Kielburger’s mother-in-law, for $0. The home is assessed at more than $1.7 million. 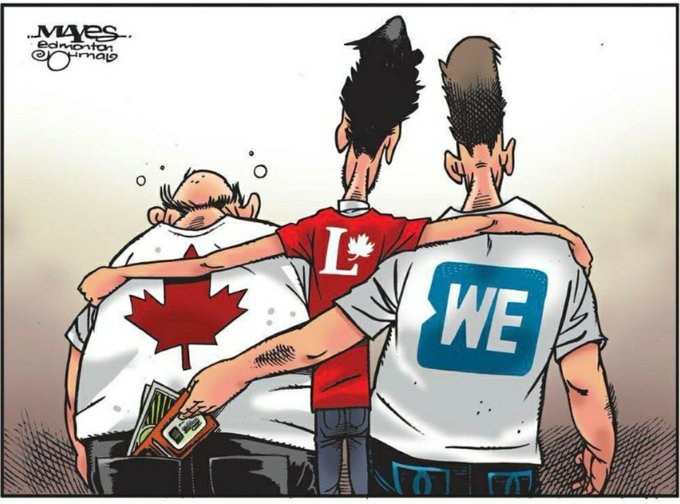 When the pandemic began, WE Charity promptly laid off the majority of its workforce. Media reports assumed that this was a direct result of COVID-19, with its obvious impacts on donations and live events.

But in an interview with Canadaland, CI’s Managing Director Kate Bahen shares information from WE’s own audited financial statements that tells a different story – one of an organization that appeared to already be in crisis and making strange financial transactions when COVID hit, to anyone who bothered to look.

A full two weeks after we noticed her at SDA…

As I posted yesterday (re: Kielburger call):
The senior bureaucrat who "recommended" #WECharity for $912M sole-source contract was Rachel Wernick: the sister of Michael Wernick (ex-PCO Clerk).

Does throwing yourself under the bus for PMJT run in the Wernick family?#LavScam https://t.co/PU2LemFd5N 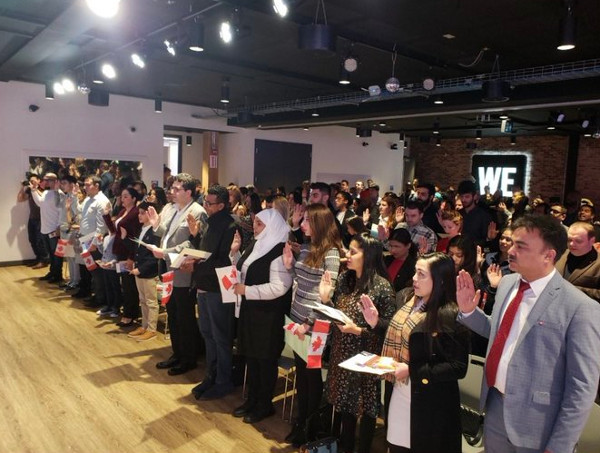 In 2012, Craig Kielburger challenged school kids across the country to help change the world with the smallest of donations, the penny.

“There is nothing more impactful I can see the penny doing,” Kielburger told the crowd at the We Day in Toronto. Sharing the stage that day with celebrities such as Martin Sheen, Al Gore and Justin Trudeau, Kielburger asked young people to save their change to save the world.

By the end of the 2013 school year, $1.4 million was raised from more than 3,000 schools across the country. They were told they would be helping to give people clean drinking water; I wonder how those children would feel knowing they were donating to a charity that was about to become a major player in real estate.

And more… For 2 months between October and December 2019, Teresa Tam and the Public Health Agency of Canada hired WE Charity for unspecified services, in a sole-source contract, totalling $25,000.

Cashing in on empty voluntourism;

In 2012, I was in Rajasthan, India alongside a group of other keen young Canadians, ready to change the world with Me To We. Although our group was sponsored by a corporation, the three-week trip would have normally cost around $5,000 per participant.

We were told that we’d be contributing to the building of a school in a rural community. In reality, we spent the first week moving a pile of bricks from one side of the work site to the other, the second week moving them back, and the third week painting some walls the wrong colour. […]

When I came home from India, Me to We seemed less concerned with me going forward and pursuing more impactful change than they were in getting me to spend more money. I was soon emailed about purchasing another volunteer trip.

Reflecting the realities of COVID-19, we are cancelling WE Day activities for the foreseeable future. We are proud to have hosted 137 WE Days welcoming over 1.5 million students who earned their free tickets by contributing 70 million hours of service to 3,000+ charities and causes.

Finally, we recognize that 25 years of rapid expansion and ground-breaking social entrepreneurship has resulted in an organizational structure that is more complicated than it needs to be. We are proud of the social impact WE has enabled, but we realize that its structure needs to be easier to understand and more transparent for all our stakeholders. We also recognize it is time to review some of our policies and practices.

When the media started asking questions, WE Charity backed away from almost a billion dollars.

The questions persisted, and now WE Charity is backing away from our classrooms and our kids.

I have more questions.

Uh-oh. JT asked WE Charity to host a 2017 Canada Day event on Parliament Hill, Kieleburger said, for which the govt paid $1.18 M. And his mother, who had been receiving fees for making public appearances at WE events at the time, was a speaker at the event. #cdnpoli pic.twitter.com/zJNgpsx4UI