So this is awesome…

Pluto is here with important tips.

Yours in the comments.

🚨 K9 Takedown 🚨
Amazing video of K9 Bo of the San Diego County Sheriff’s. The suspect fled in a stolen vehicle and started hitting K9 Bo with an umbrella. But K9 Bo refused to give up that easy. Great Job K9 Bo 🐾💙#BluePawsMatter 🐾#LivePDNation 🇺🇸#LivePD 🚨 pic.twitter.com/P1872vERUV

This may very well become a series.

A growing number of livestock veterinarians are raising concerns that dogs rescued from Chinese meat markets could bring African swine fever virus to the United States.

Rescue groups regularly save dogs from slaughter in China and transport them to this country to be adopted as pets. But because such dogs are considered food animals in China, they often are kept in close quarters with other livestock. [..]

“These dogs are rescued from meat markets,” said Lisa Becton, director of swine health information and research at the National Pork Board. “And, unfortunately, at these markets there are a lot of other species, like pigs, chickens and cows. There is a risk that the animal, the crate or the bedding could become contaminated.”

The “retail rescue” fraud is importing tens of thousands of dogs into North America each year for both resale and donation drives — along with a growing number of foreign disease variants and parasites.

Dear Kate and others quite familiar with dogs, do you think this is true?

While we’ve all met dogs who are clearly smarter than say … trolls on SDA … I still am not convinced that “Stella” is able to “talk” as is portrayed in the story. 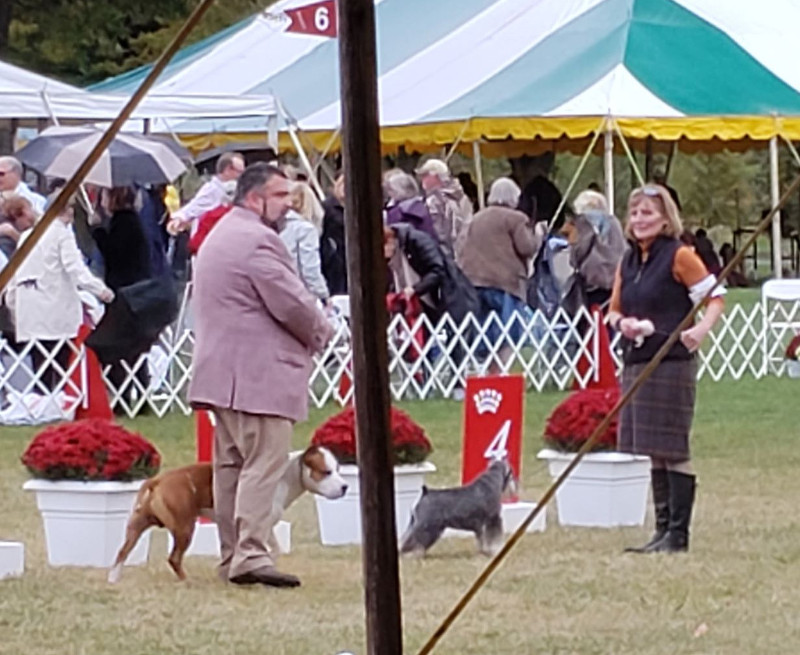 Waiting for awards presentation in the rain at Montgomery County KC.

There is only one dog show in America that challenges the prestige of the Westminster Kennel Club show in New York, and that’s the terrier-only event known as “Montgomery County”, held every year on the first weekend of October near Philadelphia, PA.

I made my first trip to Montgomery in 1981 with my mother, won my first class, and have returned nearly every year since. For Terrier enthusiasts, it’s our Superbowl. We work all year developing puppies and older dogs with the goal of peaking on that weekend.

In recent years “Minuteman” Mini Schnauzers have enjoyed very good success on the weekend, with several different dogs winning major awards. However, with every top winning Mini Schnauzer in America in attendance, along with others flying in from around the world, just getting to the main ring to compete with the 31 other breeds for one of the four group placements is considered the most difficult task in our breed.

This year we not only won the breed at the American Miniature Schnauzer National Specialty, but placed fourth in the group with my new young dog, AmCanCh.Minuteman Colder Weather. Colder’s win could be considered a genuine upset — it was just his third weekend competing as a finished champion.

I don’t know what the next year holds for us yet, but for now I’m just content to bask in what is by far, the pinnacle in my many years of breeding and showing purebred dogs. 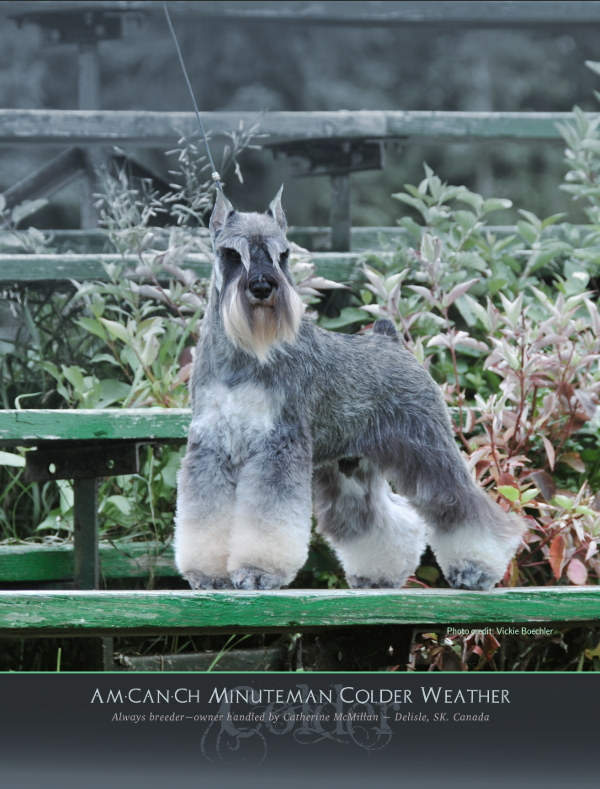 Now, I must get busy finding out what happened in the world while we were having fun.

It is a heartbreaking story involving the taxpayer-funded Explosive Detection Canine Program (EDCP), which also provides specially trained dogs to foreign nations—mostly Arabic—under an antiterrorism assistance project operated by the State Department. The goal is to enhance the ability of their law enforcement agencies to deter and counter terrorism. The State Department doesn’t bother following up to assure that the recipient nations are keeping their end of the agreement to adequately care for the precious animals. The sordid details resulting from the government’s negligence are only public because the State Department Inspector General received an anonymous complain on its hotline. The watchdog launched an investigation and published the findings in a lengthy report that includes agonizing pictures of the victims in the custody of their foreign handlers.

Just when they thought they had it all figured out: Researchers into canine eye disorders discover an “un­pre­ced­en­ted mode of in­her­it­ance”

None of the dogs transported from South Korea to Wisconsin show signs of illness, but diagnostic testing revealed two dogs to be positive for B. canis. Wisconsin law requires that positive canine brucellosis tests be reported to the state. Public health authorities with the Wisconsin Department of Agriculture, Trade and Consumer Protection were immediately notified and have led the response.

Each dog, even those that tested negative for canine brucellosis, will be quarantined until they are no longer considered at risk. In addition, shelter dogs that were potentially exposed to the dogs from South Korea will also be quarantined. In total, approximately 100 dogs are expected to require quarantine.

Some dogs were placed into adoptive homes prior to the positive test results. In those cases, state public health officials are contacting adopters to instruct them to place the dogs in quarantine in the home.

“Quarantine”? The only “treatment” for breeding dogs with canine brucellosis is euthanasia.

#LoosFromTheHip Feb 20, 2019 I am really starting to enjoy the discussion about sources of GHG's and now 170 million pets equivalent to 70 million people #WorkingAnimals pic.twitter.com/NB1GGaXdcs

Attempts were made to isolate the virus from the samples submitted for PCR, but with no success. Our next effort was to try to obtain sequence for virus directly from the nucleic acid used for the RT-PCR assay. This was successful for the F and H genes of CDV. Phylogenetic analyses of the sequences against various clades of CDV, indicated the imported dog was infected with the Asia-1 strain of CDV. We have no information on the existence of this clade of CDV in North America.

That’s right. They’ve imported a new form of distemper for which there’s no vaccine.

Update: …one dog out of a group of 26 dogs that were imported from Egypt by Unleashed Pet Rescue and Adoption in Mission, Kansas, tested positive for rabies.

I was getting dogs ready at a show in Sacramento a couple of years ago when a nicely dressed couple approached and asked if they could meet the black dog I was grooming.

It was a really bad time, I explained, “I have to leave for the ring in a couple of minutes, please come back later.”

There were a pair of raised eyebrows, but they respectfully walked on.

My friend Julio, who was getting his dog ready at the table beside me, grinned.

“You just threw Barry Bonds out of your set-up.”

(I showed Apollo to his Canadian championship title earlier this year.)

What do you hear?

Thread’s opened for your tips.

Tip: Don’t get one of these unless you have a job lined up for it.  (h/t Jamie)

They’re coming for the “climate”:  This parasitic worm can be deadly – and it’s coming to Europe

Not so long ago, human diseases caused by parasitic worms were thought to be confined to resource poor communities throughout Africa, Asia and South America. But in this age of global travel and changing climate, parasitic worms are slowly but surely moving into parts of Europe and North America. The long-term consequences of increased parasitic worm distributions are difficult to predict, but the harm that infection causes highlights the need for developing control strategies that can mitigate this 21st-century threat to global health.