I don’t usually subscribe to conspiracy theories but something very nefarious seems to be happening in the world, especially in America, this year. First there was Covid-19. It came out of Wuhan, China. Not clear if it was accidentally or deliberately released. Not the first time a virus has broken out and definitely won’t be the last. But the reaction to it is like nothing the world has ever seen before. A reasonable person can accept that, early on, many politicians were freaked out and didn’t know what to do. So most imposed lockdowns of their citizens. We were told initially that this was simply to flatten the curve so as not to overwhelm the healthcare systems. Fine. But as the weeks, and then months, passed the messaging changed, as did the timelines. Suddenly it was no longer enough to just flatten the curve. Now we had to wait for a vaccine – that might be available in a year, in 18 months, ever? Massive unemployment occurred, small businesses shut down, most non-Covid-19 healthcare was stopped. A shaming campaign flourished both online and in real life. An army of Karens were empowered over night to scold and report on their neighbours.

Then on May 25th a black man died in the hands of the police. Did he deserve to die? Of course not! Did most people in America and around the world feel terrible for him and his family. Of course! Did the actions of the police cause his death? Only time and a trial will tell. But a video of this event, amplified by the news media, social media, and politicians caused violence and looting and arson to almost instantly erupt all over the country. The Radical Left Antifa members appear to have fanned out across the country to stir this all up well beyond the initial intentions of the protesters. When Antifa was called out for their actions, their comrades-in-spirit in the media insisted that they were completely innocent and all the trouble was being caused by white supremacists. Uh huh.

The Black Lives Matter protests intensified, almost always seemingly surrounded by more violence, looting, and arson. Various politicians and police officers tried to appease them but it was mostly for naught. When asked what tangible changes they were seeking, there was a deafening silence. Then came the calls by “woke” politicians to disband all police departments across America. And replace them with … what??? Then came surreal videos of mostly white Leftists kneeling on the ground before black people, apologizing for their white guilt and begging forgiveness: new levels of cringeyness that we had never seen before!

Have you been able to pause for a moment to view all of this from the 50,000 feet level?  What exactly is going on? First, all of the public was made to feel insanely frightened and overly compliant by a new, unknown virus. Then half of the public was stirred up to feel violently angry, which prompted the other half to very likely feel insanely frightened and bewildered by what appears to be a massive societal revolution taking place; one with a religious-like fervor where there is absolutely no room for dissent.  Even neutrality is no longer an option. Now what’s next?

Expect events this summer to stir up the anger amongst middle of the road and conservative citizens. What recently happened in Coeur d’Alene, Idaho may provide a clue. As does the reaction to the Mayor of Chicago.  What would happen if these law abiding citizens with firearms were prompted to defend themselves in coordinated attacks against them?

Extremely naive politicians such as the Mayor of Minneapolis and the Prime Minister of Canada provide examples of simpletons who think that all citizens are going to sit back and let themselves and their families be harmed, their property and savings destroyed, and their freedoms canceled.  Expect a growing anger from the silent majority.  This will almost certainly be expressed at the ballot box in America in November.  Still much doubt if the Democrats will allow fair elections to occur.  In the “blue” cities and states, where too many sheeple have been infected with Woke-flavoured Kool-Aid, expect a large exodus to smaller communities and redder states.  Change is coming but it likely not what the protestors on the streets right now are expecting.

If you can get past the first 20 minutes, this becomes a very powerful interview:

Over the past year we’ve watched the American Left start destroying each other from within through increasingly more stringent “purity” tests. Such was also the case during the French Revolution.

In the past few days, some prominent Republicans like Rand Paul, Mike Lee, and Matt Gaetz are adamant that the ability to go to war should return to being solely under the purview of the Congress, as is clearly stated in the Constitution.

On the surface, President Trump appears to be angry over this but some are suggesting that this may not be the case.

Here’s what US$2.75 Million buys you in San Francisco.

Jean Charest looks set to run for leader of the federal Conservatives:

Former Quebec premier Jean Charest is keeping his powder dry but those who have spoken to him are under no illusions – he is in as a contender for the federal Conservative leadership, with his official announcement expected later this month.

Former political adversaries are already using their bully pulpits to take a pop at him. Former Parti Québécois cabinet minister Joseph Facal wrote a barbed attack Tuesday in Le Journal de Montréal that suggested Charest is addicted to the political jousting, the exercise of power, the limelight and the adrenaline but has little to offer beyond personal ambition.

Donald Trump is an outsider to the American political system. So is Tulsi Gabbard. And so is Andrew Yang.

Drop the labels. Drop the party colours. Imagine that Yang was running as a Republican in 2024. Precisely what is wrong with what he’s saying?

When will the pilgrimages commence?

The leftist geniuses in San Francisco have decided to send a message about climate change by creating a 6 story mural of Greta Thunberg using 700 gallons of aerosol spray paint. 🤣 https://t.co/LdJj2i3j99 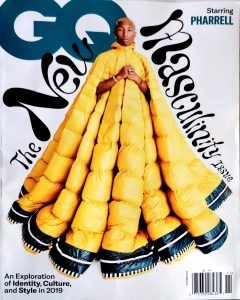 Paul Joeph Watson has published a comprehensive video sowing how deeply fraudulent the “eco-saviors’ are.

Interesting conundrum for the EU

In Hamilton, Ontario there is an evolving case of Radical Leftists squelching the free speech of others under the guise of “fighting hate”. The feigned righteousness of these folks is truly bewildering.

Former principal secretary to the woman who destroyed Alberta’s economy asks an interesting question. We already know how the MSM and government employees will answer it but what about regular Albertans?

Under the honour system, we invite you to put yourself into the role of a political media critic.

Step 1: Watch this video, created & published by a pro-Democrats organization.

Step 2: Jot down your notes about what you like and dislike about this ad. If you worked for the Republicans, how would you counter it?

Step 3: Watch this critique by someone who you should instantly recognize and see his review of the ad.

Step 4: Add to your notes your thoughts about Step 3 and then copy & paste them all into a comment here on SDA.

Trade is the life-blood of any nation, state, town or shopkeeper. Being against free and fair trade is anathema to a healthy economy. That damned freak with the hair did it again, sabotaging opportunities for markets.
What? Oh. Well, who do you think I’m talking about?
Ironic that one of the reasons being shopped around is because of Quebec politics, cough, Bombardier.
Via maz2
See also what the Aussies think.
I’m guessing the Dragon told the Beaver what for.

I’m a little torn about this story.

While conducting a welfare check, police found Macke’s four children – two 12-year-olds, a 6-year-old and a 7-year-old — alone.
Police discovered that Macke left the U.S. a day earlier and wasn’t set to return until Oct. 1, the Register reported. She did not arrange any supervision for the children, authorities said.

On one hand I firmly believe that two twelve-year old kids should be more than capable of taking care of themselves and two younger children for a week.
On the other hand is the qualification in the previous sentence, should be.
On the gripping hand is the unstated question…how in the heck did a welfare case with four children get the money to go to Europe for a week?