On this, the 57th anniversary of Dallas, we're reminded that had it not been for Democrat voter fraud in the 1960 presidential election there would've been no #JFK riding in an open air convertible for Lee Harvey Oswald to assassinate. https://t.co/uC9FOOO7oi

BINGO! Edward Solomon has figured out the voting machine Algorithm in Philly, explained in this video. Brilliant work.

Dominion uses a set of several different integer ratios, assigns each, such as 1:18 (1 T vote for 18 B), to two, three or four precincts. Then every time the citywide system has a global update, each of those ratios transfer to a different set of precincts, where the vote counts conform to the assigned ratios until the next global update, when the ratios transfer again to a new set of precincts. Then the votes from the new set conform to the assigned ratios until the next reset- and so on. Hard to catch but dominion is clearly applying an algorithm to adjust the votes, and is doing it by sliding the ratios from precinct to precinct over time.

Unconfirmed: Dominion may have vacated their Toronto offices.

Lee Smith wrote an explosive narrative of the Russia collusion hoax in the number one best-seller “The Plot Against the President” that became a hit documentary film.

Someone should now write “The Plot Against Sidney,” because Trump and General Michael Flynn attorney Sidney Powell is currently in the crosshairs and then some.

And the attacks are coming not just, predictably, from the left, but from people you would think would be her natural allies. […]

I’m not going to speculate on what’s motivating Tucker and Byron. They are friends and they have their reasons. Apparently, they are not disturbed by such things as “weighted-voting algorithms” or the astonishing fact that Dominion does not even report vote totals, only percentages.

Nor will I wave a finger at them because representatives of Dominion did not show up as promised Friday morning for a fact-finding hearing with a committee of the Pennsylvania House. What did they have to hide?

Well, maybe they do have something to hide.

Most of California will soon be locked down every night, courtesy of Emperor Newsom. Let’s see if Herr Newsom now issues arrest warrants for those who refuse to comply!

Statement from @OCSheriffBarnes on the limited Stay at Home Order issued by Governor Newsom. pic.twitter.com/qDnYS4fk6U

In an extraordinary turnabout that foreshadows possible legal action, the two GOP members of Wayne County’s election board signed affidavits Wednesday night alleging they were bullied and misled into approving election results in Michigan’s largest metropolis and do not believe the votes should be certified until serious irregularities in Detroit votes are resolved.

The statements by Wayne County Board of Canvassers Chairwoman Monica Palmer and fellow GOP member William C. Hartmann rescinding their votes from a day earlier threw into question anew whether Michigan’s presidential vote currently favoring Democrat Joe Biden will be certified. They also signaled a possible legal confrontation ahead.

“I voted not to certify, and I still believe this vote should not be certified,” Hartmann said his affidavits. “Until these questions are addressed, I remain opposed to certification of the Wayne County results.”

Added Palmer in her affidavit: “I rescind my prior vote to certify Wayne County elections.”

Both GOP board members said their concerns included there were discrepancies in nearly three quarters of Detroit’s precincts poll books where ballots are supposed to be matched to qualified voters.

All while the hottest ticket on the political net tonight is the Wisconsin Elections Commission Special Teleconference Meeting livestream, as the Democrat members try to amend the procedures manual after the Trump campaign filed for a recount .

And then, from the Northern Frosts, Bob Spindell appeared to save the Republic pic.twitter.com/lMHhyKXEGS 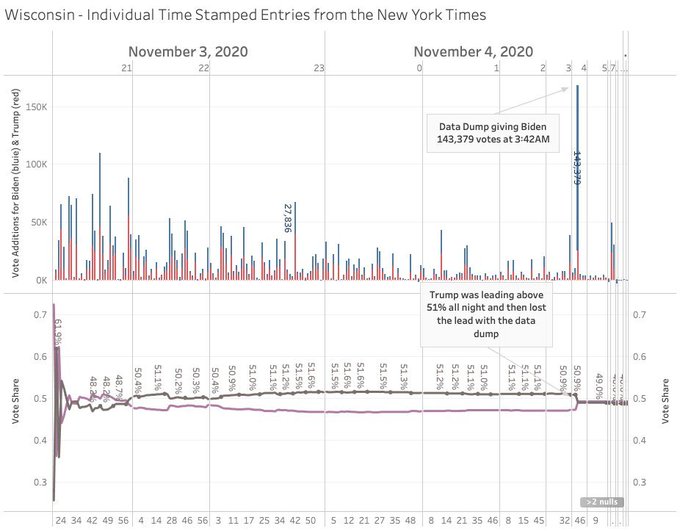 Suspicious dumps in Georgia: Do me a favor and click on the spreadsheet below. Then scroll down until you start seeing highlighted cells. Then continue to scroll and tell me if that looks legit. 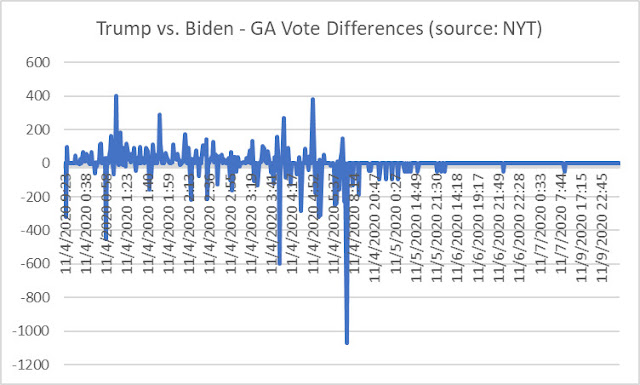 Emperor Newsom and his Little Band of Privileged Elites:

Wow — no masks, no social distancing, no outdoors. Total pack of lies! https://t.co/oRIhSuStP6

Keep on voting for these cretins, Californians!!!

There was a bizarre switch on election eve. As vote counting suddenly and oddly was halted in several key states, the tallies, which had shown that a substantial victory was in the offing for the President, suddenly — and statistically impossibly — ran up huge numbers for Biden and away from Trump. This certainly creates an impression that the shift was the result of theft.

Other indications besides the statements of these lawyers (the analyses by statisticians, the hundreds of sworn affidavits by poll watchers) who certainly would not risk their reputations on baseless charges of such significance, suggest that the counting was seriously flawed and likely tampered with.

By whom and how the evidence of it was obtained remains unclear, but as this is likely to be a continuing issue, I’d like to share what I have been able to find through the work of numerous online commenters and researchers .

More: Is that mood shift I see?

BREAKING—Pres Trump has been called to an emergency meeting at the White House with his legal team. Massive legal filing imminent.

Related: In this article, I will argue that there are many lines of evidence the combination of which justifies us thinking that significant voter fraud occurred in the 2020 US election which increased the chances of Joe Biden winning in key swing states.

Do tell: Considering these five facts about the election, it’s no wonder Biden failed to achieve a landslide victory — and one might say it’s curious that he’d achieve victory at all.

A recent podcast of Megyn Kelly featured writer, Matt Taibbi. Get past the fact that he’s not a Trump fan and you’ll find an interesting conversation where he and Kelly dissect the Woke culture that is damaging our society. Towards the end of the podcast they talk about “White Fragility”, written by self-proclaimed racist, Robin DiAngelo.

This subject particularly hits home with me because a few months ago I was invited to a socially distanced picnic in Mountain View, California with a dear friend of 4 years. Not too long into it she told me that I had to face up to the fact that I was a racist. She admitted that she was a racist too. All of this comes right out of White Fragility specifically and Critical Race Theory more generally. I suggested to her using words like “biases” and “prejudices” might go a lot further in gaining allies and winning her argument, but she would have none of it. Hey, if my friend wants to call herself a racist then go for it. But I entirely reject the label being affixed to my forehead!

Here’s an excerpt from Taibbi’s article:

It takes a special kind of ignorant for an author to choose an example that illustrates the mathematical opposite of one’s intended point, but this isn’t uncommon in White Fragility, which may be the dumbest book ever written.

This dingbat racialist cult, which has no art, music, literature, and certainly no comedy, is the vision of “progress” institutional America has chosen to endorse in the Trump era. Why? Maybe because it fits. It won’t hurt the business model of the news media, which for decades now has been monetizing division and has known how to profit from moral panics and witch hunts since before Fleet street discovered the Mod/Rocker wars.

For corporate America the calculation is simple. What’s easier, giving up business models based on war, slave labor, and regulatory arbitrage, or benching Aunt Jemima? There’s a deal to be made here, greased by the fact that the “antiracism” prophets promoted in books like White Fragility share corporate Americas instinctive hostility to privacy, individual rights, freedom of speech, etc.

“Trump won the largest non-white vote share for a Republican presidential candidate in 60 years. Biden underperformed Hillary Clinton in every major metro area around the country, save for Milwaukee, Detroit, Atlanta and Philadelphia.”

Robert Barnes, the foremost election analyst, observes in these “big cities in swing states run by Democrats…the vote even exceeded the number of registered voters.”

With a little help from their friends.

Hmmm… Did the US Raid European Software Company Scytl and Seize their Servers in Germany?

You gotta admit, Leftists have that special touch when dealing with others:

An anti-Trump protester shouts that if parents are racist then their baby is racist, he then called a Latino Trump supporter a “fucking spic” pic.twitter.com/HAB60Pvrb0

Using the PA Date of Birth dataset, we can see day by day mail returns incredibly correlated across the state, within large counties, across age groups. I'm not sure how you'd get these correlations without a central group drawing from voter records&filling out ballots en masse https://t.co/awwRWQqv40 pic.twitter.com/uSzFZ17Xa5

More in the thread.

Related: And just like that, the bellweathers fall silent.