The non-medical Public Health Director of Los Angeles County, Barbara Ferrer, is insisting that 10 Million citizens stay home for 3 weeks. But she has exempted Burn-Loot-Murder (BLM) protests and … likely because of the recent Supreme Court ruling, churches. How benevolent of this Deputy Dictator to grant these exemptions. But otherwise the sheeple of Los Angeles better damn well comply!

The results of an annual poll were just released in Great Britain. Is anyone surprised that Journalists are only at 23% ? 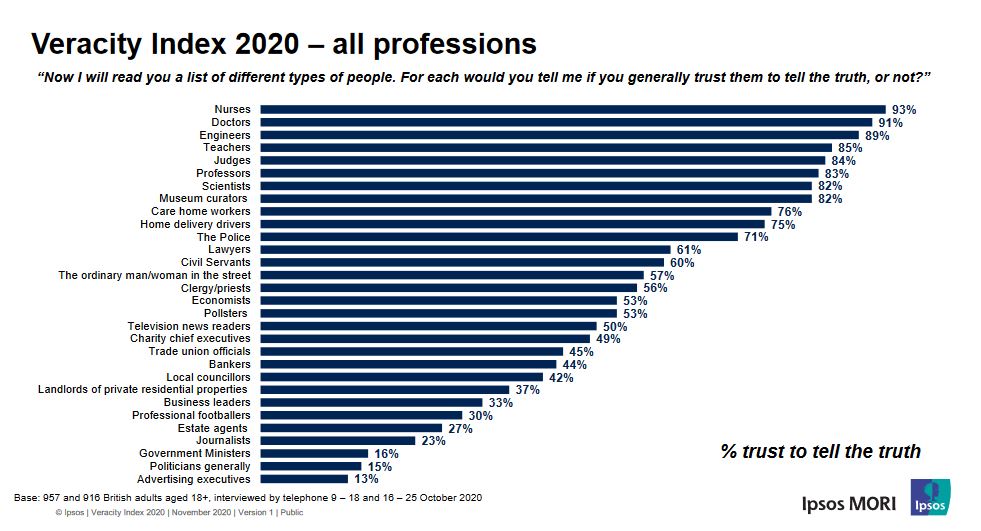 P.S. If teachers continue to go down the Woke path, expect trust in them to plummet.

Before the U.S. Presidential election, I predicted that if Biden & co. got in that there would be a war of some sort involving American troops in 2021. I still believe this to be true.

In person shopping is not so busy in NYC:

Black Friday was a real bust across the five boroughs — with COVID-19 appearing to ward off the usual crowd of customers from brick-and-mortar shops on what’s traditionally the busiest shopping day of the year.

About 30 shoppers queued up outside Macy’s before it opened at 6 a.m. but the crowd had dissipated just a couple of hours later. The big-box retailer was peddling doorbusters like $19.99 watches and 40 percent off all boots and shoes.

“I got here at 7 (a.m.) but there was no line,” said Akhter Begum, 23, who opted for in-person retail therapy for good reason. “Sometimes online doesn’t show everything. Sometimes the size doesn’t work. Sometimes (items) look different from the pictures.”

Toronto Star writer, Evelyn Kwong, has successfully shut down a “pop-up broth bar” in Toronto … because the owner is a white woman:

Sadly, the frightened owner of Ripe Nutrition, Alexandra Baird, has capitulated to the mob. With a vomit bag at the ready, read the comments to Baird’s Instagram post. I would walk across the street to avoid encountering any of these holier-than-thou morons. Is this really what Canada has become?!?

One would logically conclude that Racist Kwong will next be demanding the closure of sandwich shops and burger joints not owned by white people and pizza restaurants not owned by Italians. Waiting, waiting . . .

The Kansas City Star editorial board has found their inner Woke Karen and smeared on the guilt & fear very heavily:

But this fact is inescapable: Gatherings of almost any size this Thanksgiving are still dangerous and should be avoided.

Kansas City Mayor Quinton Lucas is more blunt. “Please, change your plans,” he said. “I’ve had 35 Thanksgiving turkeys in my lifetime. I can wait until next year for turkey 36.”

This isn’t getting through to everyone. An estimated 180,000 people are expected to travel through Kansas City International Airport during the Thanksgiving holiday, a scary number. There is anecdotal evidence that front-porch parties and weekend bar-hopping remain a thing.

But remember: While Thanksgiving is a holiday on the calendar, it’s also an idea. Gratitude and grace will survive a canceled dinner, or a missed slice of pie. There’s always next Thanksgiving, if we take care of ourselves now.

Next year? You honestly think the same voices won’t be screaming the same, or worse, next year? Maybe they won’t have to when the larger state has imposed Communist China like restrictions on everyone who can only travel with a digital vaccination passport. Come to think of it, if Biden & comrades attempt to impose is national lockdown, aided with guns pointed at citizens who don’t comply, then the test against a once free people will come much sooner.

P.S. You’ll notice that this post has been tagged with “Religion of Submission”. This used to exclusively refer to Islamic Terrorism. There’s now a new competitor for this moniker.

Tonight we offer you an interesting documentary about the Golden Age of Flight. Your best tips of the past day are much appreciated!

Has Gavin Newsom ever uttered anything honest in his entire life? Seems unlikely:

Tonight we travel to Scotland to enjoy a very special song of the ages.

Your most special tips of tbe past day are most welcome!

Lynn Mahoney is a totalitarian thug. She’s also the President of SF State University. Here’s her most recent message to all of the students: 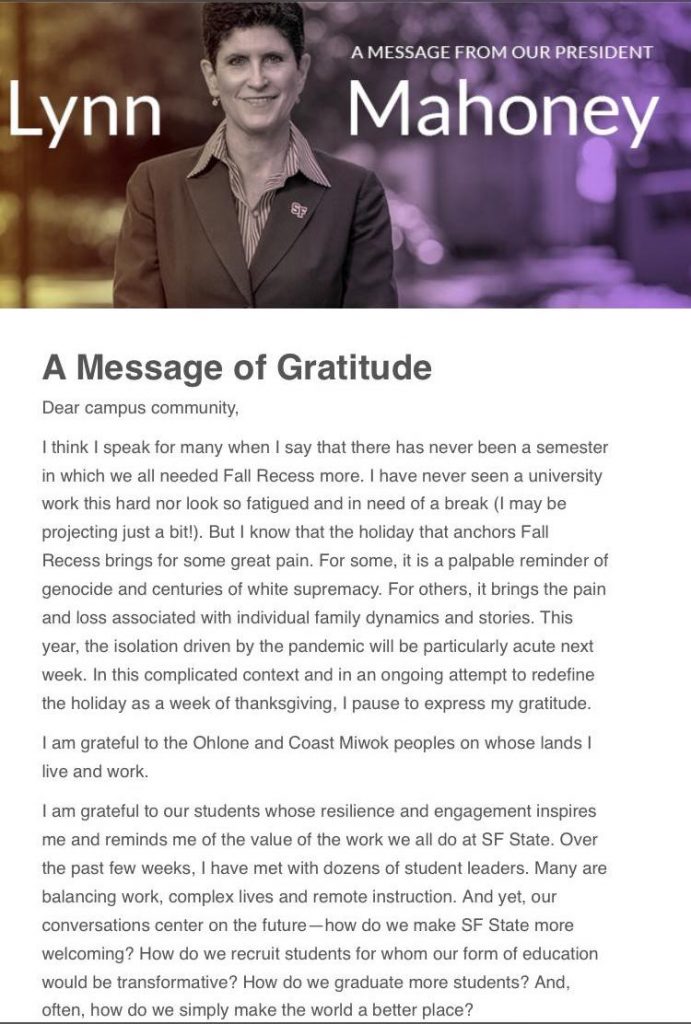 Earlier this month she penned this bountiful gem of “wisdom”. It seems astounding that Ms. Mahoney has so openly created a hostile learning environment for everyone cursed with born with white skin, anyone who doesn’t think Joe Biden and his socialist comrades offer the best path forward for America, and anyone who believes that Donald Trump and the Republicans have the same constitutional rights in 2020 as Al Gore and the Democrats did in 2000. One can only wonder what missives she is preparing for 2021? Perhaps mandatory “re-education” classes or camps?!

An Institution of Higher Learning is supposed to promote free speech, open discussion, and challenging long held precepts. Not SF State under Mahoney. The muting of individual thought she is promoting would feel very much at home in Communist China and North Korea.

Two final questions: How can someone whose salary comes from ALL Californians get away with being so deeply partisan, expressing outright hatred towards specific groups of people? Why has Lynn Mahoney not resigned, given that she is benefitting from centuries of white supremacy that she spoke of?

His Twitter feed is worth a read. One wonders who he’ll vote for once he gets to Florida?

SDA regular ‘ET’ shared some brilliant thoughts this morning. Everyone should carefully think about what she had to say:

When the power, and it is a power, to run a nation moved from the control of an hereditary aristocracy, into the control of ‘the people’ – then, those-who-want-this-power moved to How Do We Control The People and make them, the one day of every few years, Vote Us In Power?

And so- the brainwashing and manipulation of The People began – to ensure that One Day of Voting ensured that our new Elites – were in power [and the wealth that results from this power]. Simple. They took control of socialization – in the schools, in the local governments – by funding these institutions. So, the curriculum has to follow The Ideology [think of censored books, of required ‘sex education classes’ etc]. And, these governments took control of the media [think of Trudeau funding Canadian media if and only if they support Liberal policies]. And – dividing the population into separate ‘Identity Blocs’ – and making these populations adversarial to each other and dependent on govt funds [this is a huge tactic of the US Democrats].

What’s new in this strategy to control the people – in their One Day of Voting? Well, they’ve controlled the schools and the media; they’ve made huge sections of the population dependent on government funds – so, what about the actual process of voting? In Canada, the people are further made irrelevant by our Charter, with its bilingualism law, that renders at least 80% and more of the population unable to play any role in government – and, our electoral system that puts the most MPs in the big cities – where all the government-dependent population live.

In the US – it seems that they’ve moved to sabotage the actual electronic method of voting!! This was almost inevitable – given the Fact that Trump represented – not the Elite – but, indeed, The People. Trump was and is, a fight by The People to take back power from the Elite in Washington. [Canada doesn’t have such a movement and isn’t even close to realizing how trapped-as-peasants Canadians are]… And so, the Elite in Washington have fought back – for four bloody years. Everything from riots to Mueller to impeachment to ..daily 95% media attacks to….Endless. And then, came The Vote. Of course they sabotaged it.

So- the question is: Will the People allow their rights to govern – be abandoned and handed over to an Elite in Washington? How will they fight for democracy? Canadians simply ignore – grab the CERB – and ignore the debt.

Goodbye Friday and Hello Weekend! This evening we present you with a famous scene from the movie Bye Bye Birdie starring Ann-Margret.

Imploring each of you to stay safe and sane. If you happen to have any interesting tips, please do share ’em!

More bad news for smarmy Leftists who keep insisting we all need to “follow the science and the data” but then play their own version of deaf, dumb, and blind when data appears that doesn’t fit their narrative:

For young students, the risk of dying from Covid is lower than the risk of dying from the flu, and researchers have repeatedly found that children do not easily transmit the virus to adults. The clearest evidence comes from Sweden, which did not close elementary schools or junior high schools during the spring Covid wave, and which did not reduce class sizes or encourage students and teachers to wear face masks.

Not a single child died, and there was little effect beyond the schools, as a team of Swedish economists reports after analyzing records of Covid infections and medical treatment for the entire Swedish population. The researchers, from the universities of Stockholm and Uppsala, took advantage of a natural experiment in Sweden by comparing hundreds of thousands of parents at the junior high schools (for students aged 14 to 16), which remained open, against those at the senior high schools, which switched to online instruction for two months in the spring.