After sitting at home and being paid for doing nothing, civil servants need to have a relaxing workplace to return to.

Get ready for higher taxes and economic uncertainty, as the Trudeau debt bomb rolls our way.

Prime Minister Justin Trudeau’s new government is set to impose higher taxes on Canadians, which will help fund some campaign promises but are not broad enough to also start paying down the country’s record levels of debt, leaving Canada vulnerable to the next economic crisis, analysts say.

But it’s not all bad news!

This could be a risky strategy for the country, which piled on new debt at a faster pace than any of its Group of Seven peers during the pandemic. The high level of indebtedness could limit Canada’s ability to manage long-term challenges that require massive government funding, like transitioning from a fossil fuel-reliant economy to a green one. 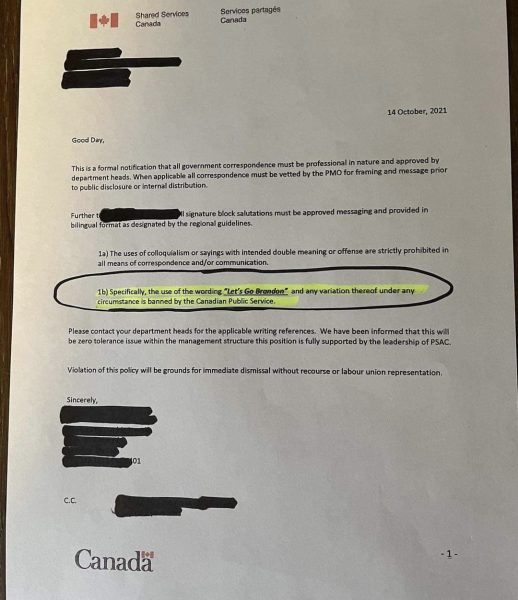 Fake? Not fake? Anyone know?

The CBC is excited about the possibility of a permanent Liberal/NDP fascist coalition.  This would allow them to concentrate on the three most important issues facing the peasants on Turtle Island. Global warming scams, more free stuff/money for Indians, and of course increased funding for the CBC.

Or stories you won’t find at the CBC.  It seems the two kidnapped Canadians were lucky to get back with all their body parts.

While the Senate is busy trying to get rid of a member that doesn’t bow down to the accepted Indian narrative, they have no problem with a Chinese communist plant.  Another great appointment by Dear Leader Kim Sung Trudeau.

China Patty instructs everyone to stay home this upcoming holiday season. Unless of course you are planning an election or going surfing in B.C.   And for goodness sake don’t call it the Christmas Season. It upsets the muslims.

Canadians have received the Communist China-lite government they wanted . . . and voted for:

Although ignored by the bought and paid for Canadian media, Dear Leader continues to amuse people outside our borders.

It even made the news in the UK

I don’t think Rex appreciates Dear Leader’s apology today. Perhaps the Heritage Minister will have to have a talk with Rex.

Now that Climate Barbie is collecting her fat pension, perhaps Climate Justin will get her a cozy job at the UN.  http://tnc.news/2021/105/taxpayers-paid-42000-for-mckennas-climate-change-farewell-tour/

Liberal voters are drooling in anticipation of all the free stuff they are going to get. Meanwhile political writers in the States are praising our Dear Leader for his “progressive” policies, including a former Clinton staffer.   That could be dangerous.

canadians arent mad bcuz Trudeau took a vacation. they’re mad bcuz he annointed himself high priest of reconciliation, spent years hectoring us about our original sin, then comes Easter Sunday, we’re in church ready for prayers, & we hear his car peeling out of the parking lot…

Washington Examiner isn’t impressed with Tofino Justin’s Turtle Island. The Trudeau cult will be on the rampage about this.

Dear Leader finally apologized for going to the beach on the whiny Indian day he created.  And how much is this apology going to cost us. Because it is always about the money. Truth And Recreation

Hey, if say someone important dies — such as (hypothetically speaking) an important national figure in government is swallowed by a wave when surfing Tofino and never resurfaces, or is ironically swept away by an avalanche, or tragically succumbs to a Chinese virus — do we lower the flags to quarter staff?

Dear Leader continues to be trashed for going on vacation yesterday. But at least he can hide at the 18 million dollar estate with servants quarters. I wonder who is paying for that?  As one brave soul stated on Justin’s CBC today, the story will quickly be forgotten in a couple of days, just like all the other scandals. The Trudeau cult is strong on Turtle Island. 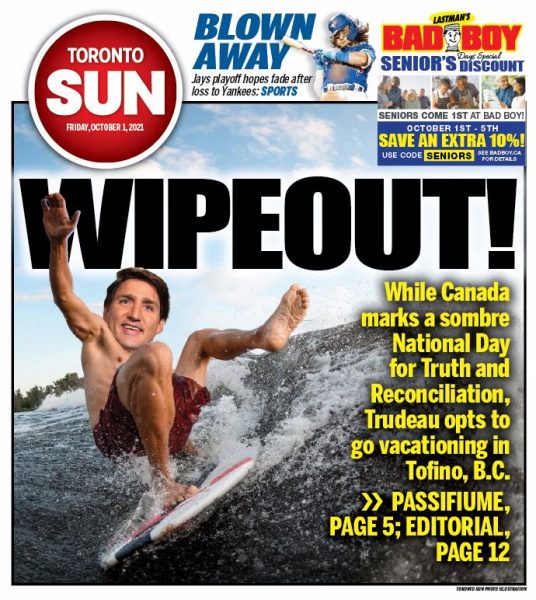 While Dear Leader is surfing at taxpayer expense in B.C., plans are moving ahead to censor anything the Trudeau cult doesn’t like. SDA will become the Young Liberals website.