I have an uneasy feeling about this. It has simulation hypothesis written all over it.

Somewhere out there Yuri Gagarin and Alan Shepard are rolling their eyes.

TRUMP: You’ll be hearing in the not-too-distant future about Kim Jong Un

Keeping Kim Jong Un dead-undead delays firing the starting gun on a deadly power struggle. The flag will drop when they are ready to go for it. 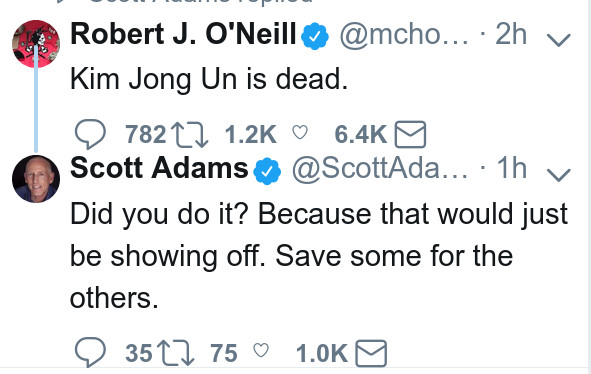 And more unconfirmed details, from Jack Prosobiec. “Doc’s doing all they can but it might be too late…induced coma, ventilation, whole works, sounds like cascading organ failure”

Fit as a fiddle, see for yourself. pic.twitter.com/fNiB5m057b

Michael Malice, who has some knowledge of the country, talks North Korea succession. (48 minutes)

Not doing so well. 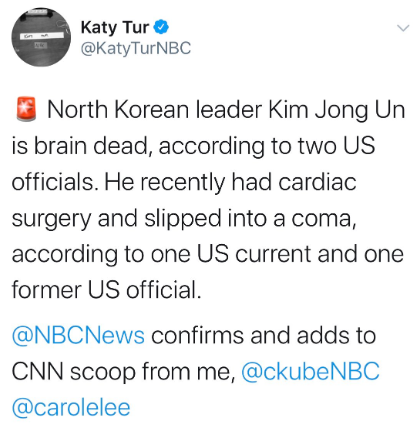 If NBC reporting is wrong that Kim Jong Un is braindead do they get banned from Twitter?

Here comes the start of the consequences…

This is just pathetic.

There goes the narrative.

“President Trump should win the Nobel Peace Prize.   What we need is only peace,” Moon told a meeting of senior secretaries, according to a presidential Blue House official who briefed media.

Donald Trump’s October 24, 1999 Meet the Press interview with Tim Russert is a historically illuminating flash forward to the most surprising, promising and history-altering opportunity since the Soviet Union collapsed: “denuclearizing” North Korea without the could-be belligerents waging a hideously destructive war that scars East Asia and seeds a global economic depression.

In the interview, Russert says Trump once indicated if he were president he would attack North Korea preemptively in order to end its nuclear threat.

Morning news:   The Koreas said they hope the parties will be able to declare an official end to the war by the end of this year.

South Korea’s Foreign Minister tells me in Seoul that “clearly credit goes to President Trump” for bringing North Korea to the negotiating table. “He’s been determined to come to grips with this from day one,” Kang Kyung-wha says. 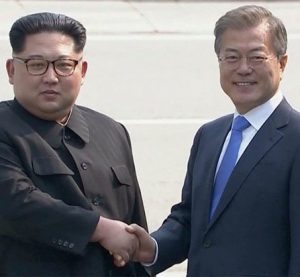 Ahead of a summit next week between North Korean premier Kim Jong Un and South Korean President Moon Jae-in, lawmakers from the neighboring states were thought to be negotiating the details of a joint statement that could outline an end to the confrontation.

And just like that, North Korea is no longer in the news.