Like Canada, Britain is afraid of being Islamophobic.  So the narrative must be that Nazis are running rampant in Western countries.

The Western media is trying hard to explain that the killing of a British MP, is all about nastiness on social media. This is why parliament must pass Dear Leader’s censorship bills.

Muslim terrorist was a fanboy of Anjem Choudary

More information is coming to light on the Islamist murder of a British MP. But please remember, it has nothing to do with Islam.

Was he killed for being Catholic?

The Taliban is demanding billions of dollars in reparations.  I bet Mohammad Justin is already cutting a cheque. 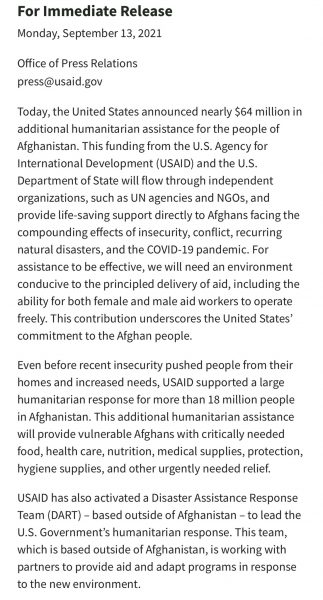 The FBI has finally released its first batch of files on Monsef’s “brothers”. But please remember, it has nothing to do with Islam.

It might be Islamophobic to report this story in Justin’s Canada. Better report it now before his new censorship laws happen.

Another Update: 9/11 at the CBC. Islamophobia is running rampant in Canada.

On the eve of 9/11 the CBC reminds everyone about the persecution of muslims in Canada. Remember, Islam has nothing to do with Islam.

More religion of peace news: As the Taliban get ready for inauguration celebrations on 9/11 tomorrow, Monsef’s “brothers” have some advice for her. They feel she should stay home and have babies.

With Mohammad Justin wanting to bring in an additional forty thousand Afghans, women will have to quit their jobs to protect themselves. But I’m sure Justin will talk them into being feminists.

Meanwhile in Islamic paradise of Afghanistan

Apparently in socialist New Zealand, yelling that you’re going to buy a bunch of knives in a courtroom doesn’t get you thrown in jail. I wonder if their PM will be wearing her muslim garb to visit the victims.

China and the Taliban are now buddies. Probably the first foreign nation that won’t have problems in that country, since China doesn’t care what happens there as long as they have mining rights and pipelines/roads. Hope the two kidnapped Canadians like working in copper mines.

Update: More news from the religion of peace

Or should we say, tanks for the stuff. Taliban now have better equipment than most armies in the world.

Terrorists are thanking Western nations for supplying them with great new buildings. The furnishings are superb. And Blackie has already promised to send fifty million dollars.

Taliban are looking pretty spiffy in their new U.S. supplied uniforms and equipment. China is excited as well.

From the people who banned Parler.

One of the Islamic State group’s propaganda arms, which celebrated a Kabul airport bombing that killed 13 American service members, uses a website and app hosted by Amazon Web Services.

With the Taliban growing more violent and adding checkpoints near Kabul’s airport, an all-volunteer group of American veterans of the Afghan war launched a final daring mission on Wednesday night dubbed the “Pineapple Express” to shepherd hundreds of at-risk Afghan elite forces and their families to safety, members of the group told ABC News.

Moving after nightfall in near-pitch black darkness and extremely dangerous conditions, the group said it worked unofficially in tandem with the United States military and U.S. embassy to move people, sometimes one person at a time, or in pairs, but rarely more than a small bunch, inside the wire of the U.S. military-controlled side of Hamid Karzai International Airport.

The Pineapple Express’ mission was underway Thursday when the attack occurred in Kabul. A suicide bomber believed to have been an ISIS fighter killed at least 13 U.S. service members — 10 U.S. Marines, a Navy corpsman, an Army soldier and another service member — and wounded 15 other service members, according to U.S. officials.

There were wounded among the Pineapple Express travelers from the blast, and members of the group said they were assessing whether unaccounted-for Afghans they were helping had been killed.

As of Thursday morning, the group said it had brought as many as 500 Afghan special operators, assets and enablers and their families into the airport in Kabul overnight, handing them each over to the protective custody of the U.S. military.

Kevin Newman: The canal where the bomb went off was the only way out

The only way out of Afghanistan for hundreds of approved immigrants to Canada was through a sewage canal bordering the Kabul airport. On Thursday, an explosive device was detonated at that site.

Until early Wednesday, soldiers from Canada had joined other nations guarding that canal. Then they left and, according to eyewitness texts and images, were replaced by armed Taliban fighters.

A “Toronto” man has pleaded guilty for killing a woman in the diverse city, on behalf of ISIS.No word on whether he will be allowed to vote for the Liberals.

And Lorrie Goldstein has some questions. What happened to Canada?

Bumped for Update: New explosions reported in Kabul in the past few minutes.

Rockets and mortars will be next https://t.co/UjCCDtEv9Q

“We have reached out to the Taliban…” — It’s bizarre listening to the commander of CENTCOM say we are relying on the Taliban to protect us and we are sharing intelligence with them.

(Reports from earlier in the day continue below.)

Nobody knows anything, but I’ll try to update as reliable information come out. (Some of the purported photos being retweeted by blue checkmarks include scenes of old events).

There are multiple reports of an explosion at the Abbey Gate at the Kabul airport. According to Glenn Beck, this is the British gate and there are preliminary reports of a dozen injured British citizens. Beck reports that three U.S. Marines have been injured in the blast and one infant has been killed. He is live on air from the region and stated that the 82nd Airborne is beginning to evacuate as we speak. Private planes from his non-profit, assisting in the evacuation, are still at the airport, and confusion and chaos abound. […] Journalist Lara Logan is also in the region attempting to assist in facilitating evacuations. In monitoring the situation, she reports speaking to special operations officers who are vomiting as they realize they will be evacuated and leave Americans and their allies behind.

Flights halted: The Taliban have blocked all roads to the airport and are not letting anyone through — even if they have a passport from a Western country.

With at least twelve US service members now reported dead, a question from @JackPosobiec: Where is the President?