When bedlamites want you fired:

Kara Lynne, the now-ex community manager of [games distributor] Limited Run, was reportedly fired following complaints from a trans activist on Twitter who had dissected Lynne’s social media history. Jonathan “Jessica” Blank, a trans-identified male better known in the My Little Pony fan community as Purple Tinker, published a Twitter thread on January 6 accusing Lynne of “transphobia” and tagging Limited Run Games in an apparent effort to have her penalised.

The so-called infractions Blank levelled against Lynne included that she had been following popular conservative social media account Libs of TikTok, and had posted a tweet expressing opposition to self-identification laws in 2016. Other alleged examples of transphobia included that Lynne had expressed support for the upcoming Hogwarts Legacy video game.

If prosecutors had devoted half the resources they must have consumed in an attempt to deny bail to Tamara Lich, maybe this guy would still be in custody and that police officer might still be alive.

A man charged in the shooting death of a Southwestern Ontario OPP officer was released on bail six months ago while facing charges including assaulting a police officer and possessing a handgun, court records show.

McKenzie, of no fixed address at the time, was arrested on Dec. 1, 2021, and charged with a dozen offences including assault with a weapon, assaulting a peace officer, assault, possession of a firearm without a licence, carrying a concealed weapon, mischief and possession of counterfeit money.

Woke theatre criticism and its complications were topics in July, as two Toronto Star reviewers, Aisling Murphy and Karen Fricker, applauded each other, and thereby themselves, for seeing an indigenous play and submitting to strict conditions on what they may subsequently write about it. Indigenous theatre, we discovered, requires approval that is both pre-emptive and unanimous, and its writers, actors and directors must be exempt from unflattering feedback, i.e., reviews of a kind that paying customers might have found useful, had they been available. Untroubled by irony, the critics, or rather non-critics, then bemoaned the ongoing, quite rapid decline of their profession and of the wider newsprint media.

Cultivated incompetence was also championed by the Oregon Health Authority, on grounds that “urgency is a white supremacist value.” Whereas, in matters of health, tardiness and lack of forethought are apparently aspirational, a woke ideal.

We also noted the scrupulously intersectional priorities of Canadian women’s shelters, where a deranged dysmorphic man roaming the halls wearing only a bra and brandishing his genitals, along with several stolen kitchen knives, was deemed of much less importance than the fact that a female resident had dared to “misgender” him.

“Unfortunately, the Biden administration is determined not to let us know” what exactly Dr. Anthony Fauci’s National Institutes of Health was funding in China, Chang told [Sen. Marsha Blackburn]. “I think it’s because Dr. Anthony Fauci purposefully evaded the 2014 ban on federal funding of gain of function research,” a scientific process in which a virus is made even more deadly so researchers can study it. This practice is banned in the United States for being too dangerous. “So, what [Fauci] did is he funded it in China, specifically at Wuhan Institute of Virology.”

“Eventually the American people will get the truth, but it could take years,” Chang said, pointing to efforts by the Biden administration to downplay American funding for the Wuhan Institute of Virology, the Chinese lab at the center of the COVID leak. The exact nature of America’s role in supporting this research still remains unclear, and Chang believes this is due to the Biden administration’s efforts to shield Fauci from criticism.

Fauci, Chang added, likely perjured himself before Congress when he claimed that his agency was not funding so-called gain of function research at the Wuhan Institute of Virology.

“So, either [Fauci] didn’t know what his institute was doing, or he committed perjury twice last year,” Chang said, referring to Fauci’s denial before the Senate that the NIH was engaged in funding gain of function research in China. “I’m of the view that he had to know what was going on for various reasons, and therefore, he did commit perjury. And the Department of Justice doesn’t seem to care.”

The University of Brasilia has subsequently issued a statement declaring the campus a “tolerant and plural place that values the richness and potential of diversity and respect for differences.”

Which would presumably explain all the shoving, screaming and threats of violence.

This $1million @FedDevOntario grant was not included in Pride Toronto’s apology and KPMG review earlier this year, current leadership must be held accountable for this cover up.

Since 2019, this is the third federal grant that @PrideToronto used Kent Monkman’s name without permission.

This is the fourth federal grant where Pride Toronto promised benefits for Indigenous artists and communities that were never delivered. This now totals $2,850,000.

The grant required that @PrideToronto submit authorization from the Board of Directors, this enabled staff to administer the project funds. Pride Toronto submitted to @FedDevOntario forged signatures of the Board.

The FTX Collapse Explained in 99 Seconds

In 2008, Goldman mastered the art of crony capitalism: pay up for government protection & get bailed out when you need it most. That’s why Goldman got bailed out while Lehman didn’t. Crypto-dude Sam Bankman-Fried just tried to play the same game by donating $30mm+ to Democrats.

The failed exchange FTX had no board of directors. That was one point of failure by investors. They wanted in the deal so badly, they let the ship go through the ocean without a rudder.

But of course! The Ukrainian government website detailing the partnership, which sought to raise $200,000,000 in cryptocurrency to be sent to the National Bank of Ukraine, has been wiped from the internet following FTX filing for bankruptcy. 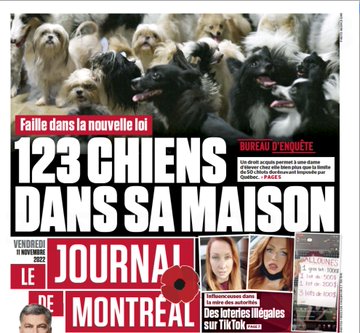 “In the interview, [he] stated that he had always wished he had been born a woman who was paralysed from the waist down.”

A new frontier in the world of make-believe identities.

There follows some obligatory rumbling about the “freedom” to have ostentatious hairstyles “without negative repercussions,” before we are informed of black employees’ entitlement to speak and behave in ways that are likely to be “interpreted as violent or aggressive.” No, really. You see, if an employee is surly, or starts cursing and shouting, while invading your personal space and flailing their arms about – such that these things can be “interpreted as violent or aggressive” – this is something that employers must tolerate, and of course defer to. We’re told, for instance, that a dislike of being shouted at or bullied by the emotionally incontinent can only be evidence of “deep, inherent bias and deeply inherent systemic racism.”

On workplace self-expression, or at least self-absorption.

Neil Oliver writes about banks and taking back control of money.

Regarding those rubber boobs and the subsequent contortions of ‘progressive’ commentators:

Two thoughts occur. Firstly, he is not a she. The teacher in question is a forty-something man with a mental health problem, and children should not be coerced to pretend otherwise. Secondly, using the word traumatising to mock or dismiss the children’s possible feelings on the subject is a sly evasion, a deflection by hyperbole. It seems more likely that some pupils will find the educator’s behaviour distracting, uncomfortable or obnoxiously gratuitous. A piss-take or shit-test at their expense.

Female students, for instance, may not feel entirely affirmed by a grotesque parody of their sex being enacted daily by a supposedly grown man, to whom they are expected to defer. Some may see such behaviour as an imposition, a provocation, a wilful overstepping of boundaries. Which of course it is. Whether the motive is lawsuit-trolling – “I’m an oppressed sexual minority, I dare you to fire me” – or just an unhinged narcissistic compulsion. Neither of which bode well for any involuntary participants. 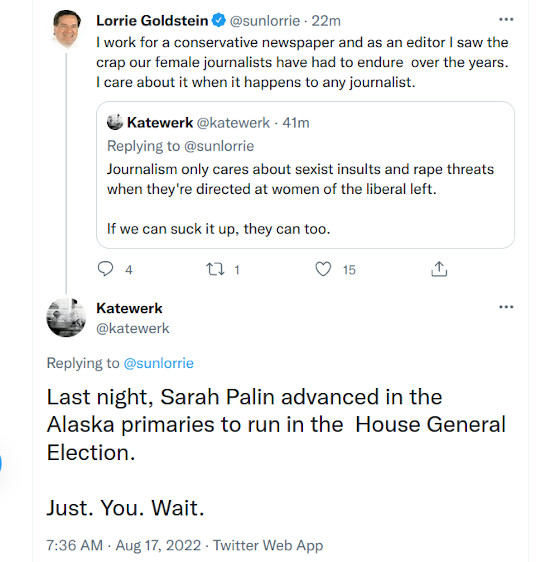 When an 80-year-old lady encounters the pointy end of transgender ideology:

When [Julie] Jaman asked… why no signs had been posted informing women that males could potentially be in the locker rooms, she says she was told: “‘We post pride signs, and we assume that lets women know what to expect.’”

What is expected, it seems, is that women who are not entirely comfortable with dysmorphic men using ladies’ changing rooms and showers, and watching small girls undress, should simply pretend that it isn’t happening. As is the custom, a kind of farce ensues, including accusations of “hatred,” bigotry, and being “unscientific.”

Victor Davis Hanson explains why people have lost trust in the expert class.  And the failure of our expert class on China.

A fish rots from the human resources department;

Members of the Canadian aviation industry say growing backlogs at Transport Canada are making it more difficult for new and existing pilots to get their licences, and the federal government has failed to address the issue.

“They don’t answer the phone, they don’t call you back, and you’re lucky if they answer emails.”

Transport Canada’s civil aviation department is struggling to issue the paperwork necessary to fly, effectively grounding an unknown number of Canadian and foreign pilots who train here. Of particular concern are unacceptable delays with Transport Canada’s issuance of medical certificates.

While applicants normally receive their certificates between 30 and 40 days after submitting their paperwork, some of Matrundola’s students have been left waiting more than a year.

Come, let us dip a toe in the world of woke Canadian theatre criticism, where our progressive betters applaud each other, and thereby themselves, for seeing an indigenous play and submitting to preconditions on what they may say about it.

If America had the same laws that Trudeau is promising, Hunter Biden would never have been able to lie on a Form 4473 in his illegal purchase of a handgun. His girlfriend wouldn’t have had the opportunity to drop it in a garbage can across the street from a school, and law enforcement wouldn’t have had to stonewall an investigation into Joe Biden’s son lying on a background check — a felony punishable by up to 10 years in prison.

He’d have just bought it off the street. Like his drugs.

TWO OF THE WORLD’S BIGGEST LOCKDOWN NAZIS MEET EACH OTHER, GET COVID.