However, in the last week, in particular, O’Toole’s missteps have made it appear that the chaos of an internal Conservative contest couldn’t be any worse than keeping O’Toole in place.

This seems to be a hard concept for a lot of people.

The Hill Times- Erin O’Toole: no path to victory

Globe- Erin O’Toole has been treed by his own party, and he can’t come down to talk

Mr. O’Toole hasn’t been saying much about anything since the election. He has taken reporters’ questions three times since Sept. 20. Mr. Trudeau has held eight press “availabilities.” Usually it’s the opposition pushing to get its points across.

An opposition party that doesn’t oppose much of anything and a leader that goes into hiding after a terrible election result, largely of his own making, are not things that inspire confidence. The Conservative Party of Canada is a dead duck in the water while the country is circling the drain.

We’ll see how long O’Toole tolerates this latest development, but considering that he did not do as well as hoped in the last election, these MPs will hopefully be allowed to run with this issue.

Conservative MP Marilyn Gladu says she and other colleagues are forming what she calls a “mini-caucus” within the existing Tory caucus to advocate for Canadians concerned about the impacts of vaccine mandates.

He may not have been all that sincere. 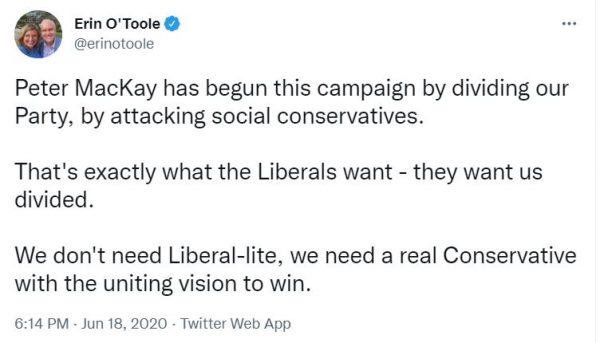 Then again it’s probably all Peter MacKay’s fault for giving him the idea.

I’ve cut this one in half and queued it up to the meat of the analysis.

When you do worse than Andrew Scheer in Toronto…

Team O’Toole had a golden opportunity to have a long conversation with Jordan Peterson and his over 4 million subscribers right before election day but they weren’t interested. Maybe the strategic thinkers thought the MSM would treat them better. A few hours after this mornings disastrous press conference a new video dropped.

An hour and sixteen minutes with Maxime Bernier.

This week’s media pile-on directed at Alberta and Saskatchewan was a deliberate political trap, timed and designed to benefit the federal Liberals and NDP on Monday.

The strategy: to force a humiliating public policy reversal on vaccine “passports” to anger the libertarians/conservative base and drive votes from Erin O’Toole to the PPC.

He ducks. Every time.

This isn’t the #leadership we need to end covid for good.

Want to know why Stephen Harper won three elections (even though two were just won minorities) and Erin O’Toole likely will not win this one? It’s because, when the liberal establishment — political and media — squawked about some right-of-centre Conservative policy, Harper stood his ground. He ignored the liberal carping and whinging and paid voters the respect of explaining why his ideas would work.

It’s settled then is it?

Liberals, Conservatives suddenly agree on the need for EV sales quotas. How will they deliver post election?

Conservative Leader Erin O’Toole is the latest federal party leader to promise a national system for proving residents have been vaccinated against COVID-19.

O’Toole says he would work with provinces to devise a national proof-of-vaccination system, adding such a setup would help Canadians during international travel.

O’Toole says he wants 90 per cent of eligible residents vaccinated against COVID-19, and is pledging to cover the cost of time off for employees to get a shot, free transportation to vaccine clinics and a national booster shot strategy that would initially target seniors and the immunocompromised.

Anyone have anything different on the table?

Analysts polled by Reuters had expected the annual rate to rise to 3.4% in July, from 3.1% in June.

Update: Most convincing ad yet.

One of the most senior members of the Conservative Party leadership ring has resigned following Erin O’Toole’s decision to fire the Yukon candidate.

Ted Laking, who was the Yukon National Councillor resigned his position Friday morning, according to multiple sources within the party speaking to The Counter Signal off the record.

Jonas J. Smith, the Yukon candidate for the CPC, was booted out of the party by Erin O’Toole on Thursday after rumours spread that he was personally opposed to vaccine mandates and passports.

It was widely expected Smith would win the Yukon race.

But I do know a guy…

Shrinking the tent while desperately trying to split the Liberal vote and they’re losing support everywhere.

Lorne Gunter- Are Conservatives under Erin O’Toole going to face an epic defeat?

But given how much O’Toole has turned off the Conservative base (particularly in Alberta) by going back on his word on carbon taxes and adopting Liberal-lite policies on nearly every other issue, between the stay-at-home factor among Tory voters and the bleeding of support to all other parties, plenty of Conservative insiders are already predicting an epic defeat for their party.

We’re not talking about Kim Campbell territory in 1993 when the Conservatives won just two seats, but it’s possible to see them reduced to just a few dozen.

Gunter didn’t mention the slide into “woke” territory but that’s as much, or more of a turn off than the carbon tax. 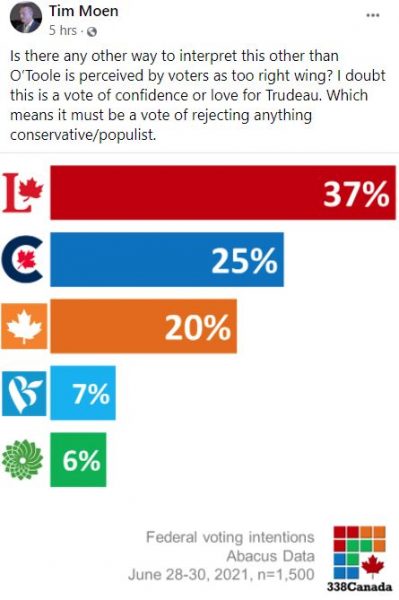 BTW- For those who don’t know Moen is the outgoing leader of the Canadian Libertarian party and this is an honest question. Where exactly do most Canadians see themselves on the political spectrum? Personally I think it goes beyond the basic left/right dynamic we all obsess over.