Listen to every word Bill Whittle has to say.

The Kansas City Star editorial board has found their inner Woke Karen and smeared on the guilt & fear very heavily:

But this fact is inescapable: Gatherings of almost any size this Thanksgiving are still dangerous and should be avoided.

Kansas City Mayor Quinton Lucas is more blunt. “Please, change your plans,” he said. “I’ve had 35 Thanksgiving turkeys in my lifetime. I can wait until next year for turkey 36.”

This isn’t getting through to everyone. An estimated 180,000 people are expected to travel through Kansas City International Airport during the Thanksgiving holiday, a scary number. There is anecdotal evidence that front-porch parties and weekend bar-hopping remain a thing.

But remember: While Thanksgiving is a holiday on the calendar, it’s also an idea. Gratitude and grace will survive a canceled dinner, or a missed slice of pie. There’s always next Thanksgiving, if we take care of ourselves now.

Next year? You honestly think the same voices won’t be screaming the same, or worse, next year? Maybe they won’t have to when the larger state has imposed Communist China like restrictions on everyone who can only travel with a digital vaccination passport. Come to think of it, if Biden & comrades attempt to impose is national lockdown, aided with guns pointed at citizens who don’t comply, then the test against a once free people will come much sooner.

P.S. You’ll notice that this post has been tagged with “Religion of Submission”. This used to exclusively refer to Islamic Terrorism. There’s now a new competitor for this moniker. 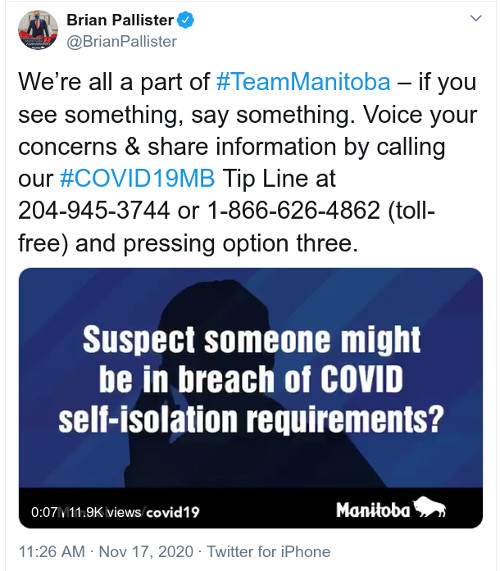 I called and left a voice message, warning that the Manitoba government has been infiltrated by former members of the East German Stasi.

Something very peculiar recently happened to a single father in Vancouver:

A single father, Crook is trying to teach his kids aged five to 11 to be independent and able to navigate Vancouver without his supervision.
He started by taking them on public transit — including their 45-minute trips to school — to teach them how that works. Over time, he began allowing the older four to go without him on their commute to school.
But somebody complained and the Ministry of Children and Family Development swooped in, investigated and sent Crook a letter warning him of its “protection concerns.”

Mr. Crook has his own blog, which is very fascinating.

If there was any issue upon which Republicans benefited and campaigned on, it was the Affordable Care Act.
They really only have two options. Let it die or the piecemeal fix approach advocated here. The problem with the first option is no one knows what gov’t behemoth would rise from the ashes.

Michael Koumjian, a heart surgeon for nearly three decades, said he considered treating the sickest patients a badge of honor. The San Diego doctor was frequently called upon to operate on those who had multiple illnesses or who’d undergone CPR before arriving at the hospital.
Recently, however, Koumjian received some unwelcome recognition: He was identified in a public database of California heart surgeons as one of seven with a higher-than-average death rate for patients who underwent a common bypass procedure.
“If you are willing to give people a shot and their only chance is surgery, then you are going to have more deaths and be criticized,” said Koumjian, whose risk-adjusted death rate was 7.5 per 100 surgeries in 2014-15. “The surgeons that worry about their stats just don’t take those cases.”
Now, Koumjian said he is reconsidering taking such complicated cases because he can’t afford to continue being labeled a “bad surgeon.”
[…]
Consumers Union, which sponsored the bill that led to the cardiac surgeon reports, supports expanding doctor-specific reporting to include a variety of other procedures — for example, birth outcomes, which could be valuable for expectant parents as they look for a doctor. “You know, I very much hope we don’t have a shutdown,” Cruz told reporters. “I will say I’m concerned. I think [Senate Minority Leader] Chuck Schumer and the Democrats want a shutdown.”

Here’s a suggestion; get your budget in order.
If it happens, hopefully Republicans learned from the D’s (I realize that this assumes the Republicans in Congress have brains). Shut it all down, except for Veteran monuments and Parks.

Yippee!
New laws to further restrict law-abiding owners, put in place to address criminals who are ignoring the existing laws in the first place.
Make murder illegal, Mr. Goodale, that would work better, don’t you think?

Albeit a winter world.

If something cannot go on forever, it will stop.*

Britain’s health service is engulfed in a “humanitarian crisis” that requires the support of the Red Cross to use Land Rovers to transport patients, the charity said on Saturday.
Founded in 1948, the National Health Service (NHS) is a source of huge pride for many Britons who are able to access free care from the cradle to the grave.
But tight budgets, an ageing population and increasingly complex medical needs have left many hospitals struggling during the winter season in recent years, prompting headlines about patients being left to wait on trolleys for hours or even days.

The Intellectual Yet Idiot is a production of modernity hence has been accelerating since the mid twentieth century, to reach its local supremum today, along with the broad category of people without skin-in-the-game who have been invading many walks of life. Why? Simply, in most countries, the government’s role is between five and ten times what it was a century ago (expressed in percentage of GDP). The IYI seems ubiquitous in our lives but is still a small minority and is rarely seen outside specialized outlets, think tanks, the media, and universities – most people have proper jobs and there are not many openings for the IYI.

Headline: EU must STOP INTRUDING in our business, says French PM
Last line: He also said Europe must defend its economic interests better, on trade matters but also on financial, social, environmental and cultural issues. “Europe must be firm,” he said.

A commentator from this ridiculous Globe & Mail Editorial. I’d have just linked the comment, but for some inexplicable reason, G&M’s comment section doesn’t provide links to comments.

Celtthedog 18 hours ago
Sigh. This is written with a sense of correcting a lot of nonsense.
I’m a Briton who lived in Canada for eight years. That doesn’t make me an expert in Canada, but it does mean I know a lot more about Canada than the writer of this editorial knows about the UK. So, here goes:
Back in the 1980s, Canada fought a general election on the basis of free trade with the United States. It was a heated debate, with issues like national sovereignty and national identity raised, along with those of economics.
The free-trading Conservatives won; the deal was done.
That’s the history. Now imagine if, on the basis of this result, subsequent Canadian governments, without putting it their party platforms, slowly but surely ceded more and more political and not economic, sovereignty to the United States. All the while denying they were doing so. As the process went on, it accelerated, and soon Canadians found their Supreme Court overruled by the US Supreme Court and that certain laws passed by the US Congress, lacking support in Canada, nonetheless became applicable to Canada. Pretty soon you’d start to question what the end destiny of this process was, only to be told by your elected representatives not to worry, political union with the United States was not on the cards.
The analogy is imperfect, but the fact is in 1975 the UK held a referendum on remaining in a “common market” (to quote from the actual ballot paper). Since then, successive parliaments have surrendered more and more of our sovereignty to the European Union — mostly in a series of treaties which polls repeatedly showed were overwhelmingly opposed by the majority of Britons (for the past 30 years polls have consistently shown that only around 20% of the British people support political union with Europe).
It’s fine for you to say the British are wrong to hold these views, just as it would be fine for me to tell you that Canada should form a political union with the United States. It’s not fine to deny people their democratic right to reject such union — or to lie about it.
I won’t waste too much time correcting the misconceptions in here about Scotland. I’ll only note that if a leave vote was so beneficial to the Scottish Nationalist Party, you may want to ask why the SNP’s chief ventriloquist, Alexander Salmon, and his dummy, Nicola Sturgeon, campaigned so aggressively for the “remain” side. Trust me, it wasn’t out of any love for Britain.
Frankly, the view of the English towards the Scots Nats is beginning to resemble that of English-speaking Canadians to the Quebec Nationalists — political blackmailers whose bluff needs to be called.
This newspaper has called for Canada to become a republic when Queen Elizabeth II dies. I understand why. Canada wants to cut the final colonial tie and become a completely sovereign nation. I respect that. But how about dropping he hypocrisy? We want to return to being a completely sovereign nation, too.

Canadians are many things but free traders we are not.
Commenter Harry Martin summed it up succinctly: “Fleecing Canadian consumers is the Canadian way.”

From the city that brought you Joe Clark.

“The bylaw that has passed has made sure that ridesharing will not come back to Calgary. We’re going to continue to advocate to make sure that Calgarians’ voices are heard in terms of the return of ridesharing,” he said.

Hey, someone has to pay for that big blue circle thing.

from Glenn Reynolds, Teach women not to rape.

It’s easy when you’re an ‘institute’ to eliminate an entire source of equity when you’ve got a narrative to advance.

The results are startling — and explain why seniors’ poverty is set to rise unless action is taken to tackle the retirement savings crisis, including boosting the GIS and expanding CPP.