Crude oil inventories are down to a dangerously low point across Europe, North America, and OECD Asia just as OPEC+ spare production capacity has dwindled to the lowest levels since April 2020.

That’s according to a new BofA Global Research report, which was sent to Rigzone on Monday. The report also highlighted that petroleum product inventories have fallen to “precarious levels” for middle distillates and gasoline “as the market heads into the peak of the U.S. driving season”.

“As a result, refined petroleum cracks have recently spiked to record levels, contributing to boost volatility across the oil complex,” the BofA Global Research report stated.

Only China appears to have a reasonable inventory cushion against the unexpected, according to the report, which noted that this rising inventory buffer could be explained because “Chinese fuel demand is exceptionally weak (an unplanned buildout) or because China has been hoarding oil to protect itself against the next energy crisis (a conscious effort)”.

The Biden administration has canceled one of the most high-profile oil and gas lease sales which was pending before the Department of the Interior, at a time when Americans are suffering from record-high prices at the pump.

“The Department also will not move forward with lease sales 259 and 261 in the Gulf of Mexico region, as a result of delays due to factors including conflicting court rulings that impacted work on these proposed lease sales,” said an agency spokesperson.

Fox- The baby formula shortage continues to get worse

Doocy then asked: “Are truckers buying the ‘Putin Price Hike’?”

Rowe responded by saying, “The ones I know aren’t… A guy said to me the other day, it’s like … falling down the stairs in slow motion. We’re watching it happen. It’s happening in real-time, and it’s not just diesel. It’s not just gasoline …”

Intentional destruction or incompetence cascade? It seems like everything is breaking at once.

Half of France’s nuclear power plants are offline because of “maintenance or defects,” which comes at a precarious time for energy and power markets across Europe as prices soar due to the Ukraine conflict.

Bloomberg reports energy supplier Electricité de France (EDF) is struggling with widespread outages after 28 of the country’s 56 reactors are offline due to routine maintenance or defects.

[We] have a hundred-trillion-or-so dollar effort that under presidential directive must be fully up and running by 2035, with everybody’s light and heat and everything else dependent on success, and not only don’t we have any feasibility study or demonstration project, but we haven’t started the basic research yet, and the building where the basic research is to be conducted won’t be ready until 2025.

⚡️🇷🇺🇩🇪 Kremlin says Putin and German Chancellor Olaf Scholz have agreed for experts to discuss how payment for Russian gas could be made in roubles.

Yes, natural gas is a hydrocarbon! Why do we need Ammonia? To grow food to feed 7.9bn people!

An email from a long time SDA loyalist and retired industry insider;

I’ve long said the collapse of the hydro-carbon market is not something that can just be re-started, and as the available commodity becomes scarcer and harder to find we see the idiots in the WH try to burn the world down to access what they think are Iranian and Venezuelan stores.

What the industry knows or traders know is that this isn’t an answer, Iran is desperate to get its industry going, to my knowledge I had a colleague who went out there during the Obama years after the last great US reconciliation and after all the hurdles he was pissed at Trump because theynever even got started, but as he said it has had very little equipment in
the last 40 years and its most modern infrastructure is even older and decrepit, coming from the 70’s and early 80’s.

It’s the same as Venezuela – does no one remember that the government there nationalised everything and left the oil majors of the day leaving millions in assets behind just for it to rust and rot while their own corruption meant they had to import fuel?

Rest assured though the Chinese are in both countries busy as hell using and supplying all that western oilfield equipment. What they may find difficult is the expertise to use it. The Chinese will of course make sure they can provide for their own use first and foremost. I remember that brief period when Libya opened back up and Europeans rushed in expecting a bonanza, only
to find next to nothing and then to lose what the did find in a still ongoing conflict.

Russia on the other hand has maintained a competent industry and has the world’s largest reserves.

Interesting times are getting more interesting with each passing of the day. 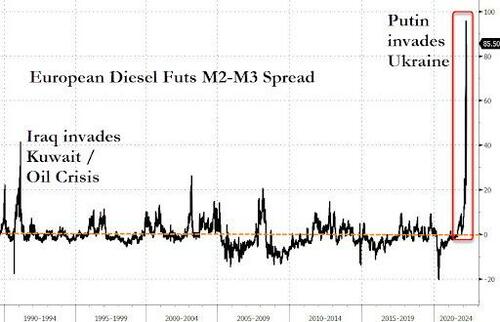 “Saudi Arabia and the United Arab Emirates refused to take Biden’s call as he sought increased oil production to help lower gas prices in the US, the Wall Street Journal reports. Ostensibly, the snub relates to a demand for support against Iranian proxy terrorists, but it goes deeper than that on both ends. . .

Related: … the U.S. is in a commodity crisis that is giving rise to a new world monetary order that will ultimately weaken the current dollar-based system and lead to higher inflation in the West.

Perhaps we would not be in this predicament had the current federal government not spent years doing everything in their power to stymie oil production and the construction of export infrastructure. The Liberals would be shocked at how quickly a free market could ramp up production, but allowing a free market to function is about the last thing they would do.

“Let’s be reasonable, we can’t help Europe with oil,” Steven Guilbeault said in an interview with Bloomberg News. “Our export capacity is pretty much maxed out. We’re building a pipeline. It’s just going in the wrong direction and the idea that we somehow could start to build a bunch of new infrastructure in Canada and it would magically happen — either for gas or for oil — is not very serious.”

For the first time in history, a U.S. city has hit an average gas price of $5 per gallon.

Terrence Corcoran- Putin blows up NetZero and the green reset, Massive failure of two branches of the United Nations

Following days of intense pressure from the U.K. government, UK energy giant BP Plc said it will exit its 19.75% stake in Russian oil company Rosneft, a dramatic reversal after Russia’s invasion of Ukraine as Western nations are trying to inflict as much economic pain as possible on Moscow. BP had held its stake in Rosneft since 2013. BP is Rosneft’s biggest private shareholder, according to the Russian company.

Via reader and industry insider Adrian;

Honest you could not make this shit up.

I wonder how those of my old colleagues feel about their BP pension being a play thing for children. There will be only one winner and one long term loser, actually a loser now, in the future and forever.

I have said it for years Russian plays the long game, Russia will continue to dominate as the supplier of Hydrocarbons and she will reap the rewards and get to say exactly what she wants. I remember the Russian contingency being asked how low the price of oil needed to get before Russia stopped producing. The answer was it can get to $1/Bbl and we will still be producing and selling. That is how you obtain and keep a monopoly. The west is no longer a serious proposition.

The deal would be settled in euros, the source added, in line with efforts by the two states to diversify away from U.S. dollars.

“China’s coal shortage last year served as another wake-up call that natural gas has its special value, that’s why CNPC decided to top up with the new pipeline deal,”

Aris Rousinos over at UnHerd had a good essay at the end of January on what we’re seeing unfold today in the Ukraine.

UnHerd- Putin’s next move, a shock and awe campaign could overwhelm Ukraine

And in case you missed it earlier this morning O.J. had a good piece from Victor Davis Hansen as well.

Putin’s Predictabilities- It is easy to predict what the Russian president will do in any given situation. Biden is making it easier for Putin to act with aggression.

If you think the vandalism and violence witnessed at the CGL pipeline isn’t an economic hostage taking, similar to the yahoos who shut down our border crossings, give your head a shake. Let’s look at how hard and fast Canada has fallen when it comes to LNG investment.

The US was behind Canada when it comes to LNG planning a decade ago. Now it has lapped Canada many times. While we struggle to build one large scale LNG plant, the US and world have moved on.

In response – Its not rocket science. This is an example of many Gofundme accounts they operate & continue to receive funds from to pay for illegal activity. Millions have been raised over the last decade by Eco Activists. They use our language& sacred terminology to get taxpayers to send money

“At that point, we decided to cut the building and saved the last two bays”.