Victor Davis Hanson writes about the current state of politics in America.

The raw material of the ballot-gathering strategy is the phantom voter or address. Every ballot needs to tie to someone — even if only a name on a list.

Live, votable ballots accumulate at addresses where the indicated voter does not reside. Those ballots, gathered, are the inventory of electoral victory. He who gathers them can vote them.

The ballot-gathering system was frictionless until 2020. Thousands of phantom addresses inhabited every state’s voter list.

For the ballot-gathering strategy to work, Democrats need tens of thousands of phantom addresses and voters. A few is not enough. Without thousands of loose ballots tied to phantoms, the edifice comes crashing down.

They also need Republicans to do nothing.

The Wisconsin team proved, in this election, that adding even a small amount of friction – removing thousands of phantom names and identifying several hundred thousand incorrect addresses — has a massive impact on the ballot-gathering system.

Our Wisconsin election heroes applied Fractal Programming technology, funded by Mike Lindell, at scale to find and challenge phantoms. The process is explained at www.Omega4America.com.

They went to scores of county registrars and challenged thousands of phantoms — proof in hand. Quietly, below the radar, they showed registrars, whose job it is to deal with this sort of thing, that Bill Jones was not a real person. They helped clean up addresses that were wrong — either typos or fake.

Any one of those addresses was a landing pad for a loose ballot.

FLASHBACK 2006: “Laurie Hawn, Conservative Candidate in Edmonton Centre, has filed a complaint with the Commissioner of Elections Canada after massive voter list irregularities were uncovered by his campaign.”

You’re absolutely nuts to think there is anything suspect about this.

ARIZONA: United States elections now consist of fencing being manned by armed police officers while a drone flys above surveilling the public.

This is the United States of America not a third world nation. How did we get here?https://t.co/tccYKgQSuo pic.twitter.com/2PIscxmUvD

Now that mid-terms are over…

Yu was arrested in October, and stands accused of storing data on poll workers in a China-based server, which was a breach of the company’s contract with LA County.

In a statement, the district attorney’s office said that it had dropped the case due to concerns regarding the “pace of the investigation” and the “potential bias in the presentation” of evidence in the case.

Related. Tripp County, SD does a hand count of 13 precincts prior to the machine run. I won’t spoil the ending.

Arizona is out of control – I don’t think I’ve ever seen this before. But everyone should understand that Arizona is not going to report any GOP favored batches from Maricopa or Pima tonight. They are only dropping the remaining DEM favored batches. Tomorrow is a holiday but they say they will count.

The narrative has been set, the talking points are out.

Just slowing things down to make sure they cheat appropriately.

The voting machines just need to be cleaned. 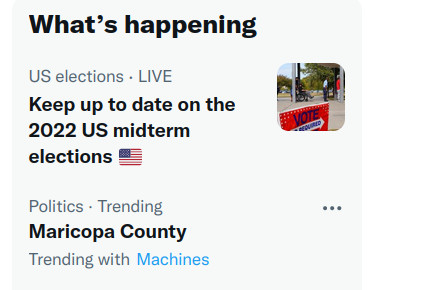 "We'll pass election reform… and make sure no one has the opportunity to steal an election again."

So, quick question: Who "stole" an election, Joe? pic.twitter.com/3BYgTMBX5w

I’m told that this is a one in a million case.

Mayor Johnson said during an unscheduled press briefing Thursday that he fired the city election official as soon as he learned of the allegation.

The election official in question is Milwaukee Election Commission Deputy Director Kimberly Zapata. Johnson said Zapata sought “fictious military ballots” from a state election website and had those ballots sent to an unnamed state representative. She did so, the mayor said, to expose a vulnerability in state law.

Which of course, it did. And that’s not permitted.

A Rasmussen Reports thread: The CCP likely has had the access passwords to multiple US election systems and devices FOR YEARS.

It was on Monday that The New York Times ran an article claiming that “election deniers” had made Konnech the center of a “conspiracy theory.” The article claimed that these “election deniers” had used “threadbare evidence” to suggest that Konnech “had secret ties to the Chinese Communist Party and had given the Chinese government back door access to personal data about two million poll workers in the United States.”

The Times claimed that these allegations against Konnech “demonstrate how far-right election deniers are also giving more attention to new and more secondary companies and groups.”

On Tuesday, the Times had to write that Yu had been arrested, and that data collected by Konnech had indeed been stored on servers in China. True the Vote, an election integrity not-for-profit, stated that they were able to download the personal information of some 1.8 million poll workers from Konnech servers in China. True the Vote passed this information on to the FBI.

White House press secretary Karine Jean-Pierre struggled Tuesday to respond to her past statements denying the results of an election — even as her boss President Joe Biden stated that “election deniers” posed a threat to democracy.

“Look, I’m not going to go back to where we were or what happened in 2016, we’re going to focus on the here and now,” she said, when confronted with past statements on social media about President Donald Trump stealing the 2016 election and also Georgia Gov. Brian Kemp.

What happens when you combine an all-in or “jungle” primary with ranked-choice voting in the general election? Putting the two modern “innovations” on elections together in Alaska produced this absurd result, in which Republicans lost a House seat despite getting 60% of the vote.

And get ready for it to happen all over again in two months.

His inside voice is off the reservation: …why did Joe Biden say, during a rally Thursday, that Democrats have a plan to make sure no one ever steals an election “again”?

Victor Davis Hanson writes about the plots against Donald Trump.

Overwhelmed city officials are struggling to provide a promised intake center and hotel rooms to migrants being shipped by the busload from Texas to the Big Apple, The Post has learned.

The Department of Homeless Services acknowledged to The Post that it has abandoned its initial plan to operate an intake and processing center dedicated to the recent arrivals alongside a 600-room shelter at the ROW NYC hotel on Eighth Avenue in Midtown.

Officials would only say Sunday that they have finally selected a finalist to operate the-yet-to-open Manhattan facility but would not reveal the contractor’s name or its location.

Starbucks, 2016: Schultz wrote a letter to employees on Sunday criticizing the “epic, unseemly” election, and he asked them to share in compassion and empathy.

Starbucks, 2020: Espinel said the company’s effort begins with conversations between managers and their employees to make sure its nearly 200,000 workers have the tools and time to vote. The chain has created a portal for its baristas with tools to register and vote.

Only Republicans can steal elections.

The Wisconsin Supreme Court ruled 4-3 on Friday that absentee ballot drop boxes are illegal under Wisconsin law, vindicating a legal argument advanced by the Trump campaign in 2020 — though the ruling will govern elections in 2022 and the future, and cannot change previous election results.

Judging from his background, it would be easy to label Barr as a charter member of the Deep State.

What Do You Say, Barr?