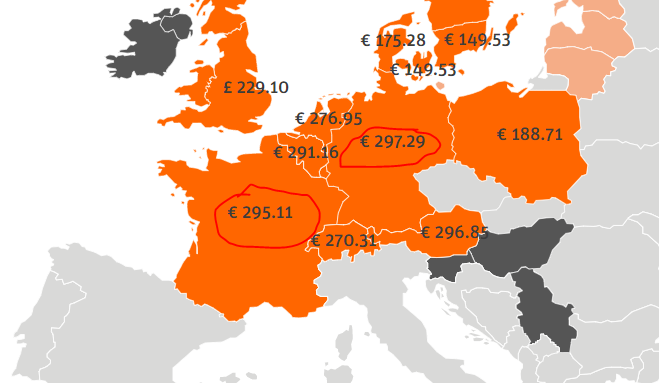 EUROPEAN ENERGY CRISIS: Short-term day-ahead power prices across Europe surge again toward €300 MWh. despite relatively mild temperatures. Gas is very expensive, and the wind isn’t blowing today or tomorrow. Germany, France, Belgium and Austria all above €290 per MWh for Tue. 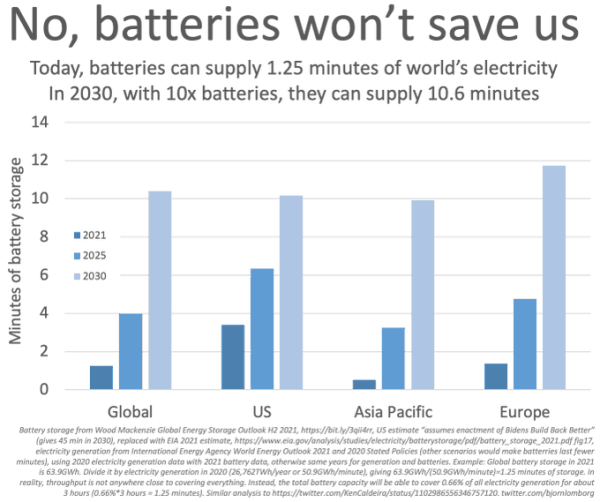 Even under the best conditions, many electric cars are still a long way from being suitable for long journeys. As a car comparison test recently showed, no electric car can cover more than 440 kilometers at a time at a speed of 130 *. The car reporter Lisa Brack and EFAHRER.com author also had to experience this painfully. She dared an electric car long-distance experiment. Because to buy her new VW e-Up, she drove from Munich to the VW Autostadt in Wolfsburg to pick up her car personally.

Brack needed 12 hours and 45 minutes for the return journey from Wolfsburg to Munich, covering a distance of 654 kilometers. The route would normally take around six hours. But it wasn’t just the duration of the journey that was appalling – the temperature during the journey was anything but funny: the heating stayed off for almost the entire return journey in freezing temperatures: Because the colder it is, the more the operation of the heating systems puts a strain on the electric car battery. Recently, the electric car cold problem was also evident at a large German company, because in Berchtesgaden in Bavaria , Deutsche Post is withdrawing its expensive e-vans due to snow and cold and is back to combustion models for the winter months.

Lisa Brack wanted to avoid Volkswagen’s expensive service costs of 700 euros and also report on her long-distance experience. To do this, she sends her electric car straight to the endurance test, because the temperatures on the way back are freezing. At 0 to minus 5 degrees she starts the journey home to Bavaria. These are unfavorable conditions for electric cars, because low temperatures paralyze the batteries in electric cars*, especially in winter.

For the trip, Brack covered himself with a hat, scarf, gloves and generally warm clothing, because after the first full charge, the VW e-Up shows a range of just 216 kilometers. And even this information is not guaranteed, which is why Brack opts for the so-called Eco-Plus mode and, of course, for the heating to be switched off. When the windscreen is frosty, heating wires ensure a clear view, so the reporter driving the test can do without the power-guzzling fan heater completely.

In order to install an appropriate app for the model, she asks a VW employee when the car is handed over. However, he immediately blocked it: “Don’t ask me that. The digital services are not included in our training courses.” So Brack has to take everything into his own hands. Then it’s on the way home, time 2:45 p.m. 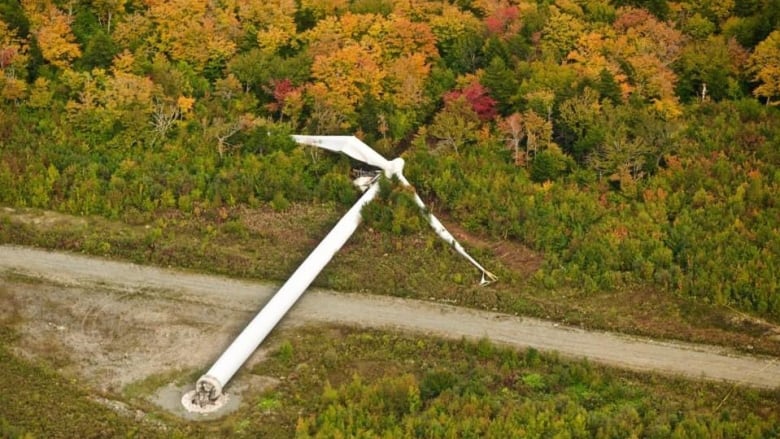 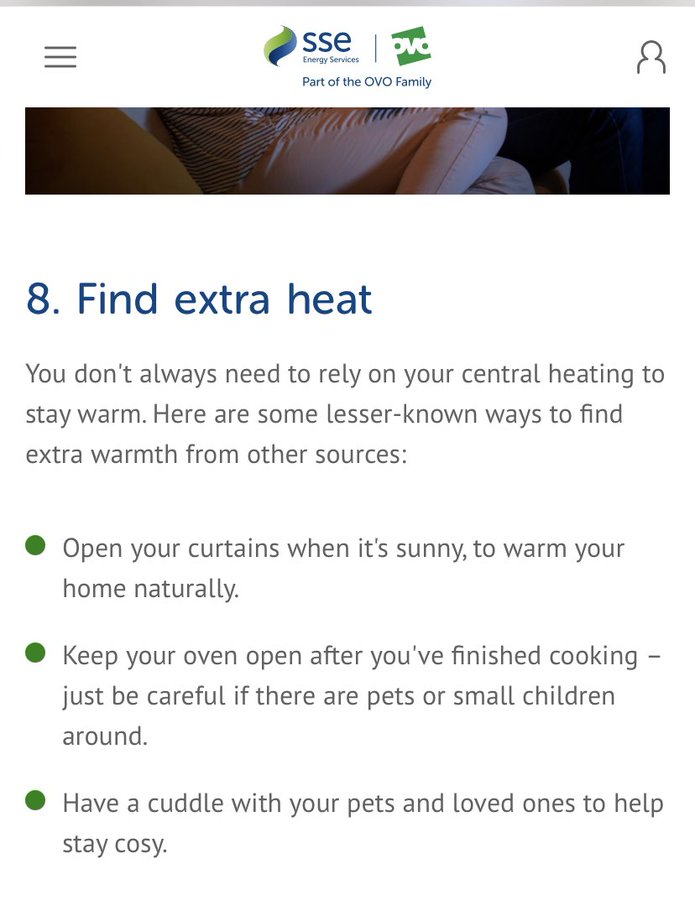 Investors are suing a Biden-backed solar energy company that received a $500 million federal loan last month, claiming the company lied to shareholders about the effectiveness and financial viability of its solar modules.

A Michigan municipal pension fund alleges that executives at First Solar, which is owned by Biden megadonor and Walmart heir Lukas Walton, made “false and misleading statements” to investors and failed to disclose that its solar module was “grossly underperforming and was unable to hit its wattage targets.” Those claims and omissions, the fund alleges, artificially inflated the company’s stock price in 2019 and led to investor losses. 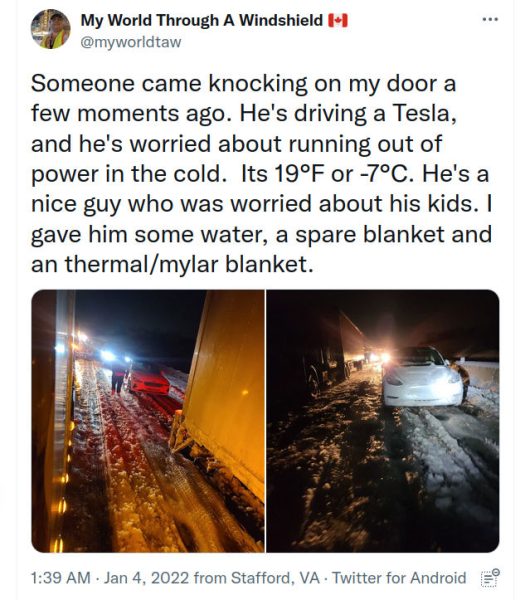 On Dec. 31, New Year’s Eve, it was cold across Alberta and Saskatchewan. On that day, TransAlta, one of Alberta’s largest power generating companies, announced it had completed its conversion from coal to natural gas. It was also shutting down the Highvale coal mine, west of Edmonton.

Their release noted, “In aggregate, TransAlta has retired 3,794 megawatts of coal-fired generation capacity since 2018 while converting 1,659 megawatts to cleaner burning natural gas. This achievement, coupled with TransAlta’s growing and diversified generating portfolio, including hydro, wind, solar and battery assets, helps position TransAlta to be a highly competitive provider of reliable, low and zero-emitting electricity for customers in Canada, the United States, and Australia.”

About that wind and solar:

The AESO website revealed some literally cold, hard facts that weren’t in the TransAlta press release. As of noon, the TransAlta Keephills Unit 1, which was scheduled to retire that very day, was still putting out 302 megawatts, of its 395 megawatt rated capacity. At the same time, Alberta’s entire fleet of 13 grid-connected solar facilities, rated at 736 megawatts, was contributing 58 megawatts to the grid. The 26 wind farms, with a combined rated capacity of 2,269 megawatts, was feeding the grid 18 megawatts.

We have the most cowardly conservative politicians since Neville Chamberlain. And I don’t think even Chamberlain would have been so stupid as to shutter Britain’s energy superstructure at his enemy’s request.

Electricity for delivery next year surged as much as 6.4 per cent to an all-time high in Germany, Europe’s biggest power market. France, which usually exports power, will need to suck up supplies from neighboring countries to keep the lights on as severe nuclear outages curb generation in the coldest months of the year.

The crunch is so severe that it’s forcing factories to curb output or shut down altogether. Aluminium Dunkerque Industries France has curbed production in the past two weeks due to high power prices, while Trafigura’s Nyrstar will pause production at its zinc smelter in France in the first week of January. Romanian fertilizer producer Azomures temporarily halted output.

Electricite de France SA said last week it would halt four reactors accounting for 10 per cent of the nation’s nuclear capacity, straining power grids already facing cold weather. At the beginning of January, 30 per cent of France’s nuclear capacity will be offline, increasing the reliance on gas, coal and even oil.

It’s weird how everything we do to “fight climate” seems not to affect Russia or China.

Then again that’s a darn fine explosion if I do say so myself.

Cold-stricken Europe is drawing a flotilla of U.S. liquefied natural gas cargoes amid an energy crisis that has sent gas prices to record levels.

Facing a winter shortage and little relief from the continent’s main supplier Russia, natural gas in Northwest Europe is trading for about $57.54 per million British thermal units, up almost a third from a week earlier. That’s roughly $24 higher than Asian prices and more than 14 times higher than gas being sold on U.S. benchmark Henry Hub.

When he heard back from the shop, they told him they couldn’t repair his car, and the only option was to change the entire battery cell.

Katainen said the fix would’ve cost him upwards of €20,000 ($22,500). He told the dealership that was absurd, and he donated the car to a Finnish YouTube channel Pommijätkät, whose name literally translates to ‘Bomb Dudes.’

I’m old enough to remember when paper bags were bad for the environment.

Following a tumultuous year for Tesla including a company relocation helmed by CEO Elon Musk, viral reports of cars on fire and other self-admitted quality control issues…

The electric car manufacturer now ranks 27th out of 28car brands on Consumer Reports’ list, above only Ford-owned legacy luxury brand Lincoln. Much of it has to do with the overall instability of electric vehicles in general — especially SUVs — which Consumer Reports’ Jake Fisher said during a presentation are the “absolute bottom in terms of reliability,” according to Reuters. […]

Among the concerns Consumer Reports had for the Tesla Model S, X and Y lines, according to CNBC, were issues with “heat pumps, air conditioning” and notoriously, misaligned panels. It’s also worth noting that Tesla’s Model X ranked dead-last among all cars for reliability, scoring a 5 out of 100. 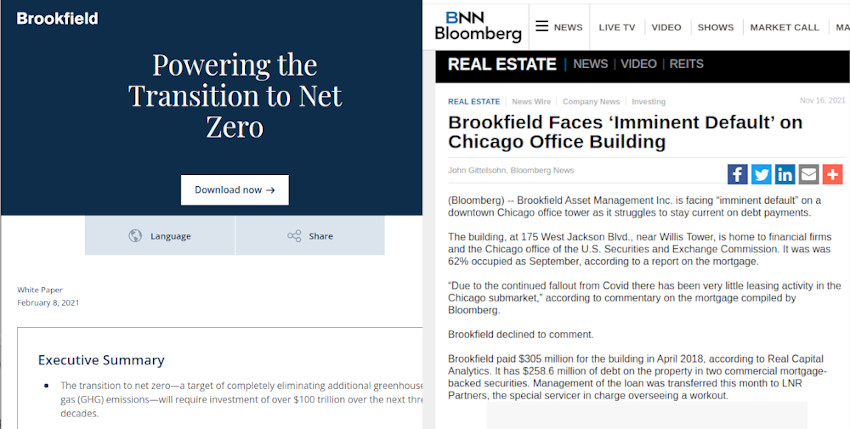 And we’re not buying them: Despite all the hype & subsidies for the last decade over them, battery electric vehicles made up barely over 3% of auto sales in Canada at the start of the year.

…yesterday, 3 November, saw a new record for the total daily cost of balancing the GB electricity grid. The previous record of £38 million, twenty times the current daily average, was smashed by a margin of £6 million, with the new record standing at £44.7m.

The causes are easy to identify from the Balancing Mechanism Reporting Service’s own chart of the Transmission System fuel mix. Wind power, the dark blue bars, was extremely low for most of the day, with a minimum of only 1 GW, under 5% of its capacity.

Minimum wind generation coincided neatly with peak demand, and as a result system prices reached stunning levels, with a maximum of just over £4,000 a megawatt hour, nearly 100 times the wholesale price normal before the current crisis started, as can be seen in this BMRS chart…

These prices brought coal and gas back on to the system to save the day, but emergency measures are expensive, and the cost to consumers and the wider economy was little short of horrifying.