A new poll reveals that only 9% of Americans surveyed are in favour of raising taxes. 77% want spending to be cut. The big question is “where” and there appears little consensus on that front.
Related: In the first part of this Ricochet podcast, there’s an interesting discussion with rookie congressman, Chris Gibson, focusing on what it’s like to be in charge of deciding what cutting must be done.
Translating this to a Canadian perspective, what are your thoughts about the general mood of the public in our country on the subject of Cutting Spending vs. Raising Taxes?

Pat Caddell is a lifelong Democrat. He is a public opinion pollster & adviser who worked for Democrat presidential candidates Jimmy Carter, Joe Biden, George McGovern, Gary Hart, and Jerry Brown. His credentials on the Left side of the political aisle are rock solid.
But he is also a man of principle and a proud American who only wants the best for his country. Thus, when he saw what was happening this past week, he decided he had to speak out against it. Vehemently! More here.

h/t Matt from Mississauga
Update: A common tactic of Leftist trolls like this one is to say something like “there are extremists on both sides but I’ve never seen or heard any major pundits on the Left say anything outrageous”. How is it that this past week one could conveniently ignore Krugman, Moulitsas, Olbermann, Matthews, Dionne, Clinton, and the entire NY Times Editorial staff? This is the true “Climate of Hate” in our culture. But this tiny sampling of examples from this past week is but a mere drop in the bucket of what has happened in the past.
Dear Trolls of the Left, please continue to post your arguments on here but do stick to the facts. We insist upon it!

Here’s a fascinating podcast from Michael Graham, in Boston.
Two memorable quotes from it include “I thought I was in the Twilight Zone” and “Where was the mourning?!” 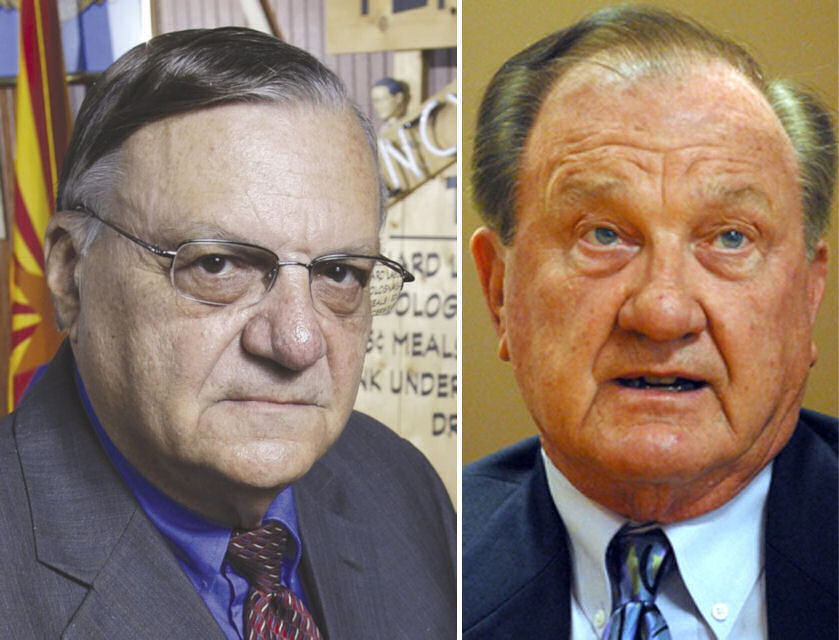 As Time has long been a de facto PR mouthpiece for the Democrat Party, I understood from the start that the article would be biased against [Republican] Arpaio and for [Democrat] Dupnik.  But the notion of comparing two nearby sheriffs with widely differing political views got me wondering how the crime statistics in their two counties compared.  After a little research and some compilation the difference in their crime stats is rather startling:

Please click on the image above to see it full-size or you can download the original spreadsheet.  In the Time piece, there’s not a word of Arpaio’s success and Dupnik’s relative failure to combat crime but as we’ve seen in the disgraceful, unprofessional “reporting” of the Tucson massacre, the mainstream media has clearly shown that they have no interest in facts that don’t support how they wish to spin a news story.

A comment in this earlier thread is well worth repeating here:

The other night I was watching Connect with Mark Kelley on CBC.
They pulled out the old Sarah Palin target map and talked about the
heightened rhetoric…days after the shooting. I thought it was too much
so I e-mailed the show with my concerns…
To his credit he replied back to me directly…
—-
Thanks for the email. Blaming us for politicising the shooting is rich.
Have you followed anything that has happened in Arizona in the past
year? I don’t blame anyone but Loughner for the shooting. And no one has
said he is a Tea Partier on our show. But the Republicans own candidate-
a Tea Partier- was abandoned by the GOP because of his views. There’s a
context worth mining in Arizona- and to discuss it makes me a lefty?
Have we met?
As for your snide remarks about the technical problems, our system
crashed. Stuff happens. We don’t practice, nor preach perfection. We
just try our best. Maybe that approach reflects my own naivete.
Cheers
MKelley
Posted by: Jeff at January 13, 2011 2:22 PM

A huge problem for folks on the Left, even the Centre Left where Mark Kelley arguably sits politically, is their complete lack of self-awareness of the bias in their own views. Combine this predilection with someone who is a “journalist” and you have an individual who is convinced that they have no bias whatsoever. It’s a delusion, of course, because each & every one of us is chock full of different biases.
I have little doubt that Kelley writes off commenter Jeff and probably most every SDA regular as “right wing extremists”. But just imagine for a moment how he would view a situation if a conservative had been killed in Tucson and someone had pointed out that the Democratic National Committee (DNC) had displayed a map with bullseyes across it. Oh wait, a conservative judge was killed and the DNC did display such a map! But drawing a connection there would be much too ridiculous according to the “enlightened” mind that is Mark Kelley.
And lest we forget, your tax dollars are paying his salary. 🙁
Update: Some have suggested that it’s unfair to publish Mark Kelley’s response without also posting the initial e-mail from Jeff. He has kindly sent it to me and here it is in full:

Dear Connect Folks,
Three days after a horrible shooting you’re still going on about the conservative rhetoric stuff?
Sarah Palin’s map? Feel free to read this link…http://www.verumserum.com/?p=13647
The jury is pretty much in about Jared as well.
Communist Manifesto…favourite YouTube video is a guy in a mask burning an American flag…backyard skull ceremony…friends indentify him as liberal (http://punditpress.blogspot.com/2011/01/friend-of-loughner-confirms-he-is.html)
This is hardly a Tea Party type dude.
I thought it was in poor taste to go down the road of politicizing a shooting rampage, but I suppose that’s a reflection of my naivete.
I don’t remember the same level of journalistic political investigation during the Fort Hood shootings and I doubt I have to get into explanations for why.
Anyway, we all have a bias, but the leftward bent is starting to be a bit much. Especially when it comes to horrible incidents like this shooting.
Best,
Jeff
P.S- The technical difficulties are pretty amateur hour for a national show. I worked on a local cable talk show in Regina that was mostly staffed with volunteers and we could make a show run smoother.

Even though copious amounts of evidence have shown that there is absolutely no connection between the Tucson shooter and conservatives or the Tea Party or Sarah Palin or talk radio, masochistic leftists keep on trying to make them. It’s truly pathetic.
Whenever you read the misguided screeds of these loathsome trolls, remember these prescient quotations from Albert Einstein:

Or, to paraphrase something Charles Krauthammer recently said: “The origins of Loughner’s delusions are clear: mental illness. What are the origins of the Leftist delusions?”

Tragic news out of Tucson.
Question: How long will it take before the MSM starts speculating that the murderer was a Tea Party member, Republican, white conservative, and/or NRA member?
Update: Early news reports did state that Ms. Giffords was killed and so that’s what I reported. The headline has now been corrected but I wanted to acknowledge my mistake.

Before I get onto the actual subject at hand, I’d like to take a moment to personally thank Kate for the great honour of blogging on SDA in 2011. Like many of you, I imagine, I was drawn to this site several years ago as a refuge from the liberal-MSM and a temporary sanctuary of sanity. Living here on Canada’s Left Coast, as I do, throughout much of my life I was told that my fiscal conservative principles and dismissiveness of political correctness made me: selfish, ignorant, narrow minded, unenlightened, and a host of other pejoratives. Fast forward to 2011 though . . . like two freight trains heading toward each other, the Great Lies of “Progressives” are starting to meet head on with Undeniable Economic Facts. As the infamous Jeremiah Wright once said, “the chickens are comin’ home to roost!”
Earlier this week, American radio talkshow host, Dennis Prager, spent 2 straight hours focused entirely on this stunning article about the increasing collapse of the social welfare state in Europe. There are several great quotes within, including this one:

“By now, only a few people refuse to understand that youth protests aren’t a protest against the university reform, but against a general situation in which the older generations have eaten the future of the younger ones.” — Giuliano Amato, economist and former Italian prime minister

The never ending cycle of borrowing from the future to pay for unaffordable luxuries today has worked well in Europe for many decades. Quite frankly, any political party that dared put a permanent halt to it would have been thrown out of office in no time for the liberal media and public sector unions would have had no problem convincing a majority of voters that More-More-More didn’t have to Stop-Stop-Stop anytime soon.
This coming decade may finally signal European society finally hitting rock bottom, not all too dissimilar from an addict reaching the same point. But they’re not there yet and it’s going to get awfully messy before it gets better. Until then, watch both the unemployment and the debt throughout Europe continue to soar.